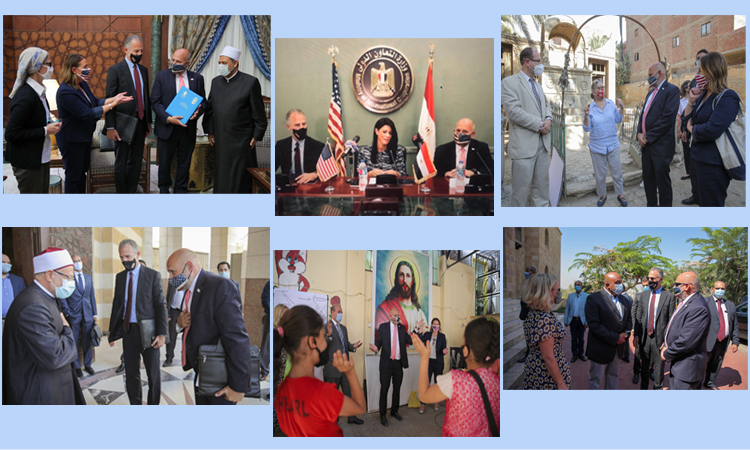 During their second day in Cairo, Acting Administrator Barsa, joined by U.S. Ambassador Jonathan R. Cohen, met with the Minister of International Cooperation Dr. Rania Al-Mashat and announced that the United States, through USAID, is investing an additional $22.8 million into its 5-year $113 million agreement with the Ministry of International Cooperation to improve the investment environment and empower women to join in the labor force.

USAID Acting Administrator John Barsa, Ambassador Cohen, and the delegation met with the Grand Imam of al-Azhar Ahmed El-Tayeb and then with the Grand Mufti Shaykh Shawki Ibrahim Abdel-Karim Allam. The delegation also met with faith-based organization Stephen’s Children and toured the Bassatine Cemetery, a beneficiary of the U.S. Ambassador’s Fund for Cultural Preservation.

The delegation visited Al Azhar Park and met with the Aga Khan Development Network to see how U.S. investments, through USAID, helped transform the park into a communal green space and incorporated U.S.-funded water reservoirs that provide clean drinking water to 30 percent of Cairo’s residents.

Since 1978, the American people have invested over $30 billion, through USAID, to support Egypt’s economic development. To find out more about USAID’s work in Egypt, please see https://www.usaid.gov/egypt, and follow @USAIDEgypt on Facebook and Twitter.