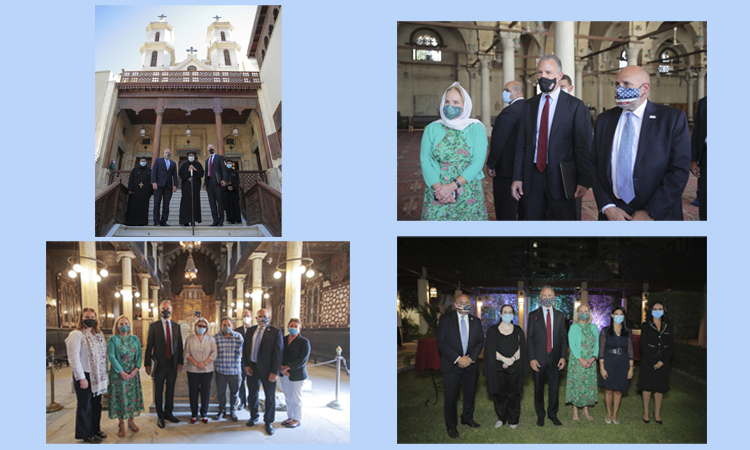 Cairo – U.S. Agency for International Development (USAID) Acting Administrator John Barsa is visiting the Arab Republic of Egypt from October 6-8, 2020 in support of the United States’ commitment to economic development and religious freedom. He is joined by Deputy Assistant to the President Sarah Makin and USAID Chief Advisor for International Religious Freedom Samah Norquist.

Today, accompanied by U.S. Ambassador Jonathan R. Cohen, the delegation visited several historic sites in Old Cairo that the United States, through USAID, helped preserve by lowering the groundwater and installing sewer lines. These included the Amr Ibn El-Aas Mosque, the Ben Ezra Synagogue, and the Saint Virgin Mary’s Coptic Orthodox Church, also known as the Hanging Church, where they met Bishop Youlious of Old Cairo. The United States, through USAID, has provided more than $100 million to preserve and restore more than 70 historic sites in Egypt, saving these sites for future generations, expanding tourism, and generating income and jobs for Egyptians.

The delegation also met with faith-based organization Coptic Orphans. In partnership with Coptic Orphans, the United States has helped over 5,000 girls in Minya, Assiut, and Sohag to develop skills to become leaders in their communities.

Together with Minister of International Cooperation Dr. Rania Al-Mashat, the delegation visited Flat6Labs, where they met with young entrepreneurs to learn about their business plans and successes. Flat6Labs, supported by the United States through USAID and the Egyptian American Enterprise Fund, is the leading business accelerator in Egypt, helping 106 businesses create 7,450 jobs. Since 2011, the United States, through USAID, has invested over $150 million to support thousands of entrepreneurs and small- and medium-sized businesses in Egypt.

The day concluded with a celebration of the new Intercommunity Girls’ Empowerment program together with Minister of International Cooperation Dr. Rania Al-Mashat, Minister of Social Solidarity Dr. Nevine El Kabbag, President of the National Council of Women Dr. Maya Morsy, Ambassador Cohen, and other distinguished guests. The $3 million program will reach 1,500 youth, parents, and community leaders in Upper Egypt to support economic development, promote understanding between religious communities, and strengthen girls’ access to education and employment.

Since 1978, the American people have invested over $30 billion, through USAID, to support Egypt’s economic development. To find out more about USAID’s work in Egypt, please see https://www.usaid.gov/egypt, and follow @USAIDEgypt on Facebook and Twitter.