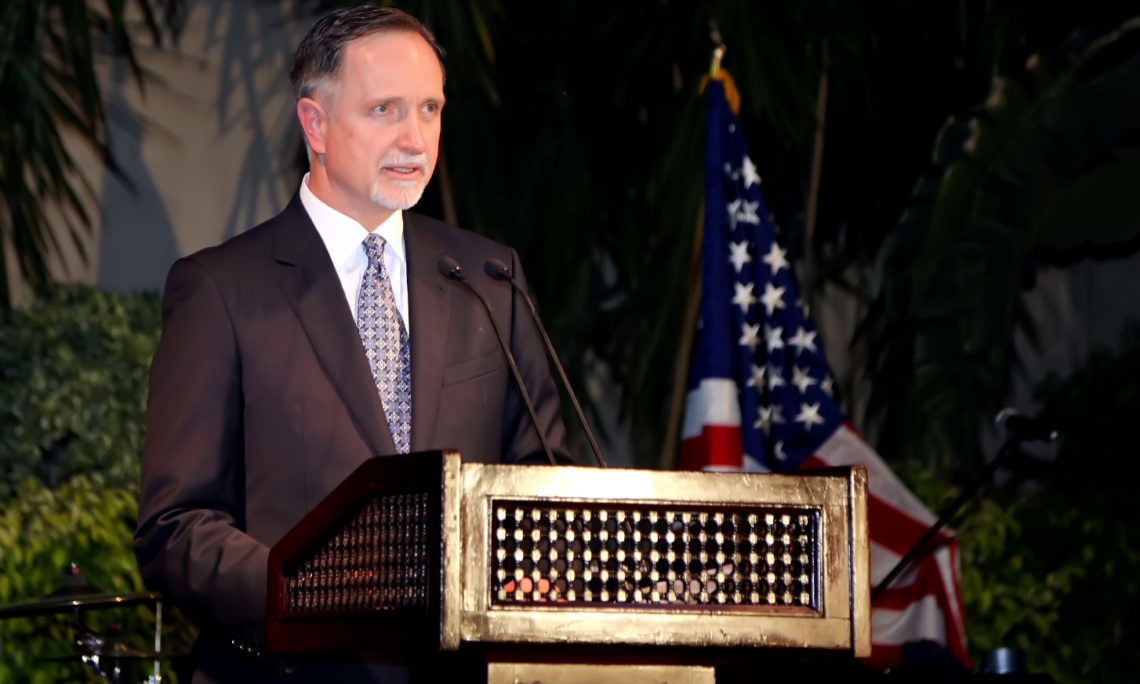 Cairo – On behalf of the entire Embassy community, thank you for joining us to celebrate the birthday of the United States. We are marking the anniversary of American Independence today rather than on July 4 for the convenience of our guests who will be fasting during Ramadan.

239 years ago, America’s founders signed the Declaration of Independence and offered a new nation, conceived in liberty and equality. There had never been a government made up of the people, by the people, for the people.  No one knew if it would work.  The birth of this new system was messy, fragile, and precarious.  In fact, Benjamin Franklin was asked, right after the Constitution was signed, what form of government would it be. And he answered: “A Republic.  If you can keep it.  If you can keep it.”

The evolution of American democracy has not followed a straight path.  We have struggled as we have strived to progress and improve.  Americans are the first to admit that we make mistakes.  But we don’t give up, because keeping the republic is at the center of who we are. So on when we celebrate our Independence Day, we celebrate the hundreds of millions of people who have kept this republic. People who worked together in good times and bad – who paid their taxes, voted for their leaders, raised families, built businesses, and worshipped their faith.

With each generation, the United States has grown stronger because of the extraordinary people from every part of the world who come to our shores.  As a nation of immigrants, the face of America reflects every race, culture, and creed. So when Americans celebrate our Independence Day, we celebrate with everyone – our great Egyptian friends here in Cairo and our friends around the world. The pyramid on the U.S. dollar bill indelibly engraves the greatness of Egypt in the mind of every American, inspiring us to make what we build equally timeless and transcendent. The mark of Egyptians in America is unique, poignant, and priceless, from Nobel Laureate Ahmed Zewail to the millions of immigrants and visitors who bring Egypt with them and infuse America with its essence.

Today is not a day for long speeches, so I’ll be short. In fact, our second president, John Adams, said that instead, “It ought to be solemnized with pomp and parade, with shows, games, sports, guns, bells, bonfires, and illuminations.”  So we have the pomp and parade, and unloaded guns of our Marines. We have the fantastic sounds of the Air Force Band. And we have hot dogs, hamburgers, beers, and wines drinks generously donated by our extraordinary sponsors.

One thing I left out is the “illuminations.” But the fact is we don’t need fireworks. We already have illuminations here with us today in the form of talented Egyptian Special Olympians and courageous advocates for those with disabilities. They are a bright light for us all – a steadfast symbol of triumph in the face of adversity and cooperation for the good of all humanity. That is what all of us here want. And that is what we are working together to achieve.

It is the spirit of hope, of faith, and of the belief that people working together for a common cause can do anything. This is the spirit enshrined in the Declaration of Independence.  It is a spirit of Egypt and many nations. It guides our official relations, and it shapes our cultural exchanges, our trade relations, and our personal friendships.  It is our compass for expanding our efforts to find common ground, to champion the future we seek for our children, and to respect the dignity of all. So tonight, let us appreciate the past and let us also celebrate the future – a future that we have the power to shape together.

Thank you very much for joining us today.