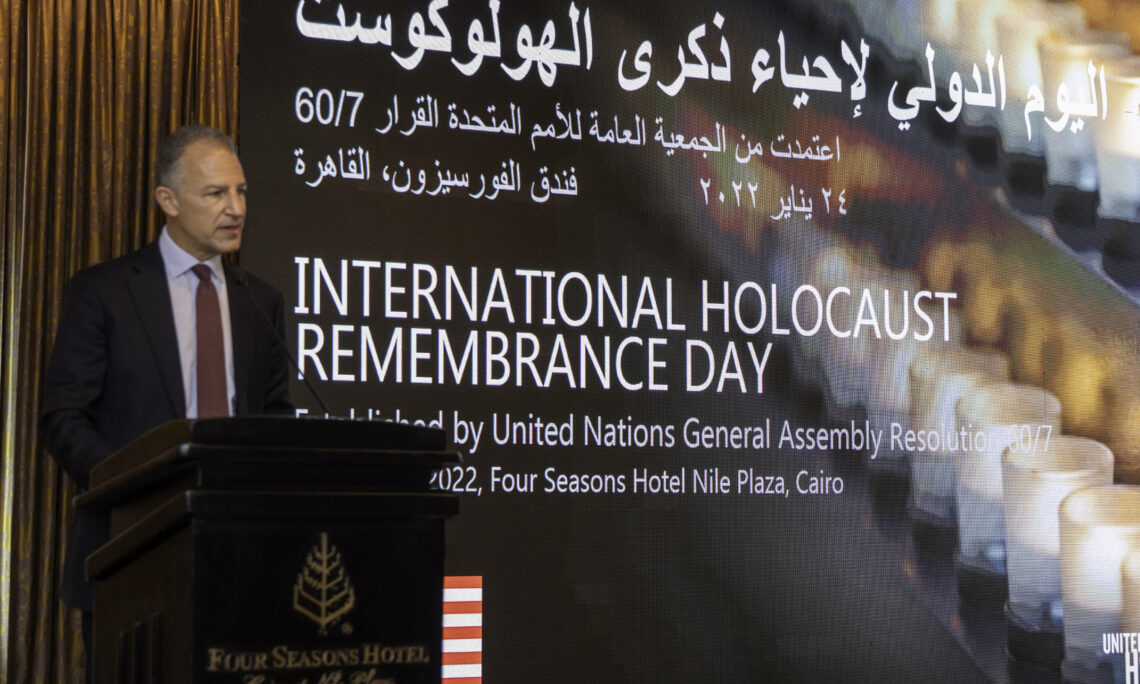 Excellencies and distinguished guests.  Today we commemorate International Holocaust Remembrance Day, honoring the lives and memories of millions of victims – six million Jews, in addition to Slavs, Roma, homosexuals, persons with disabilities, and countless others – who were murdered during the Holocaust.  It is also an occasion to honor those individuals who helped protect human life in a dark and dangerous hour.

Today in far too many places around the world, complicity and silence have allowed intolerance and hatred to perpetuate. And it’s a reminder of our duty to counter the tide of anti-Semitism and other bigotry that threatens the values that we hold dear:  pluralism, tolerance, inclusion, and the freedoms of religion and expression.

We are pleased to partner with the U.S. Holocaust Memorial Museum on this event.  The Museum has helped a new generation to bear witness to genocide, ensuring that we will  continue to learn from the victims and the survivors of the Holocaust long into the future.

Teaching and learning about the full historic reality of the Holocaust is an important factor in combatting anti-Semitism and promoting religious freedom.  Additionally, an understanding of the Holocaust reinforces the message that individuals can play a significant role in confronting persecution wherever it arises.

Many of those who survived the Holocaust were spared because of the courage of those who risked their lives to rescue Jews.  The film screening today commemorates Arab heroes from North Africa who saved the lives of their Jewish neighbors.  Although the noble acts by these individuals took many forms, their inspirational heroism resulted in incredible gratitude from those they saved, and their descendants.  Their stories remind us that we’re never powerless in confronting intolerance and hatred.

The film highlights a number of heroes.  One of these courageous people was Dr. Mohamed Helmy, an Egyptian doctor living in Nazi Berlin during the 1940s.  Dr. Helmy secretly sheltered a Jewish teenager who was hunted by the Gestapo, saving her at a time of maximum danger, and putting himself at great risk.  Thanks to Dr. Helmy’s bravery, the young woman survived and immigrated to the United States after the war.

The U.S. government seeks to foster respect for religious pluralism and diversity of belief around the world.  Religious freedom is one of our most cherished principles in the United States and it has played a pivotal role in our success as a nation, and we strive each day to live up to this ideal.

Egypt’s historic multiculturalism and heritage of religious diversity have lent strength to Egyptian society.  I commend the Government of Egypt for demonstrating its commitment to religious tolerance by preserving places of worship, and encourage its efforts to safeguard the religious freedom of its diverse religious communities.

International Holocaust Remembrance Day, established by the United Nations in 2005, was one of many actions born of the world’s disgust with the horrors of the Holocaust.  I have had the privilege to be involved in that work for decades now, from speeches that I gave at the UN while I was posted there to my work helping to found the International Task Force for Cooperation on Holocaust Education, Remembrance, and Research in 1998, which became The International Holocaust Remembrance Alliance, it started with three countries and now has over 35 member nations.

Last week, representatives from the United Nations, including a representative from Egypt, adopted a resolution condemning Holocaust denial and urging the development of educational programs to prevent genocidal acts in the future.  This will help ensure that the history of the Holocaust remains an important reference point of global conscience.

We should strive to learn from the tragic lessons of history, and from the remarkable stories of courage that emerged in humanity’s darkest periods.  Today is also a call to action.  The United States will continue to work with other countries and partners around the globe to fight bigotry and anti-Semitism, and to promote respect for the rights and dignity of every human being.  We invite and encourage others to join us.

Thank you for your attention, and for attending today’s event.