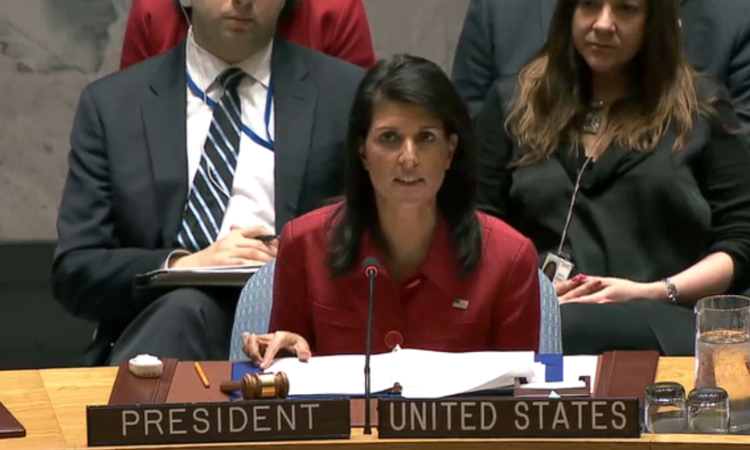 Thank you, Mr. President, and I want to congratulate you on the Presidency for August and also for starting it off in a very good way, especially for negotiations on something that brings attention to an important issue like this. So we thank you.

We know that terrorists have many ways to get their hands on dangerous weapons. They divert legal weapons transfers. They take advantage of poorly secured stockpiles. They seize weapons on the battlefield. They get them through criminal networks.

This resolution is meant to address the many ways that terrorists acquire weapons. It calls on Member States to do more to strengthen export controls and provide assistance to other countries in destroying excess weapons. It highlights the need for enhancing the physical security of weapons stockpiles and the creation of tracing programs for weapons. It sheds a spotlight on the killing potential of improvised explosive devices. It encourages public-private cooperation to prevent the transfer of IEDs, drones, and light weapons to terrorist organizations. Most importantly, it calls attention to the obligation of all nations – particularly those who profess a concern about weapons falling into the hands of terrorists – to enforce UN arms embargos.

This Council has been clear in prohibiting arms transfers to Yemen, Somalia, and other places. And yet we know weapons continue to flow across borders in open violation of Security Council resolutions. For some Member States, this is an issue of extreme hypocrisy. For all of us, it is an unacceptable stain on this Council’s authority that must be removed. It’s true that we have made great progress against ISIS and al-Qa’ida in recent months. We’re pleased that regional partners have taken steps to improve their ability to cut off ISIS from financial support and material. But weapons aren’t finding their way to terrorists only through some Member States’ failure to take action.

One country stands out for its deliberate, systematic contributions of weapons, training, and funding for terrorist groups. One country uses its support for terrorist proxies to conduct its foreign policy and to compensate for its own weakness. That country is Iran. Iran was first designated by the United States as a State Sponsor of Terrorism in 1984. Its training, funding, and arming of terrorists has continued unabated to this day. Terrorist proxies are doing the Iranian regime’s will in Iraq and in Syria. Iran also supports Hamas and Bahraini terrorist groups. Through its partner Hizballah, Iran is engaged in preparing for war in Lebanon. It is building an arsenal of weapons and battle-hardened troops.

This is the threat we face today in Iran, and it is one that no amount of technical cooperation or security upgrades will diminish. As long as we allow the Iranian regime to violate this Council’s prohibitions with impunity, it will be a source of weapons to terrorist groups that will only grow in volume and destructive capability. The United States will continue to raise this issue of Iranian non-compliance with international obligations at every opportunity.