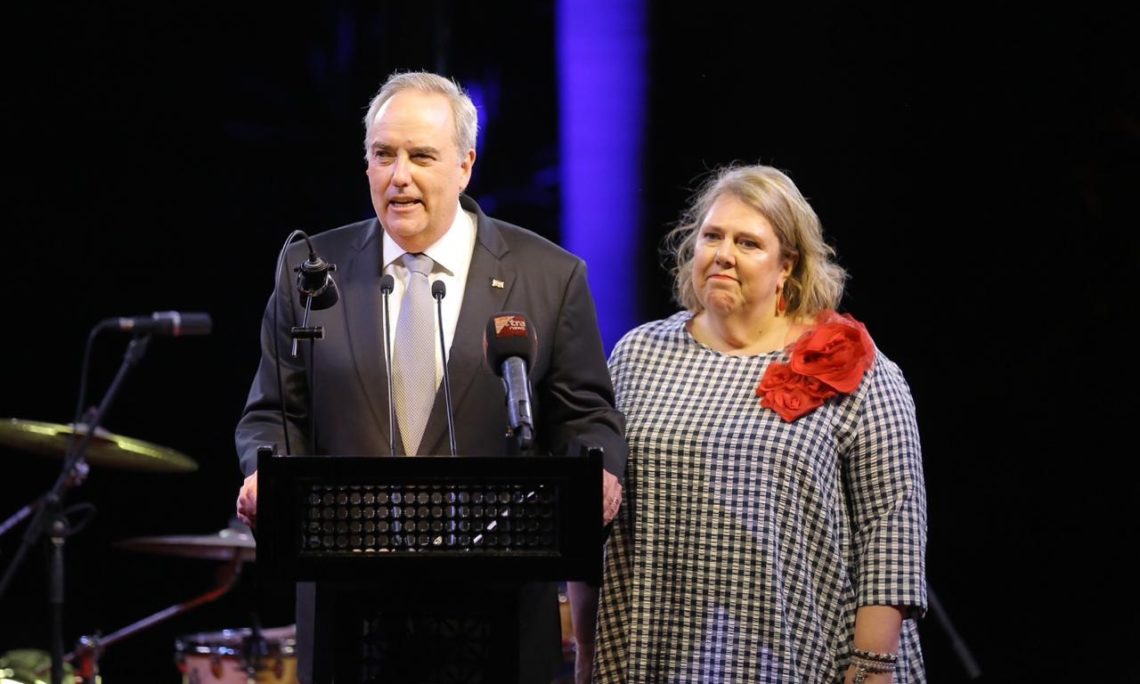 Thank you Dorothy. Welcome everyone to our annual celebration of the United States of America in the heart of Cairo in beautiful Egypt.

Tonight we are celebrating the 50th anniversary of the first steps on the moon. “One small step for a man, one giant leap for mankind.” The moon has watched over us since the beginning of time. Its cycles are the cycles of humanity and nature. The fact that human beings have set their feet on it is a marvel of human history. It shows the amazing things that lie within us and what humanity can accomplish when we combine our ingenuity with unbounded imagination.

This has been a year of many milestones and anniversaries.

Of course, we are marking the 243rd anniversary of the American Declaration of Independence, the beginning of the first modern revolution against imperialism and foreign domination. Over the past nearly two and a half centuries, the spark of human liberty and potential lit in Philadelphia has brought uncountable blessings to Americans and inspired the nations of the world to seek their own freedom, sovereignty, and self-determination.

It was not an easy path, and in many ways it is not complete.

It is only 75 years since the Allied forces landed in Normandy. The combined forces from North America, Europe, Australia, and New Zealand under the leadership of General and future President Eisenhower combined with the huge armies that had already liberated northern Africa and Italy and had pushed back the invaders of Egypt. A year later they met the armies and freedom fighters of the Soviet Union and the nations of the east in Berlin, ending the Holocaust and the Nazi dream of ruling the world for 1000 years.

Thirty years ago, in 1989, an evil wall in Berlin that was built to keep people inside their communist prison crumbled as the inevitable collapse of another would-be world-dominating ideology began. This also would not have happened without American strength and determination along with our refusal to compromise on our foundational belief in the importance of free nations working together and of human rights and human dignity. This work continues as we fight together to end the would-be caliphate and other like-minded pretenders that want to deny us our national and our personal sovereignty.

Another landmark this year is 40 years since the Treaty of Peace was signed in Washington by the brave leaders of Egypt and Israel. This work is also not yet done, but it was the indispensable first step in bringing the blessings of peace, prosperity, and security that will allow the diverse people of this part of the world, so rich with history and potentiality, to achieve their dreams and aspirations as individuals and as societies.

Yet another landmark is the 100th anniversary in the United States of women achieving the full right to vote, equal in political rights to men. America’s progress over the past century is thanks to the unleashing of the power and potential of women, and the respect of the rights of all adults, regardless of gender, religion, race, or national origin, to participate in the democratic determination of our politics and destiny.

It is also a significant year in the history of the United States and Egypt. The first American diplomatic representative arrived in 1849, 170 years ago. Daniel Smith McCauley served for 3 years before passing away at post in Alexandria.

Egypt’s revolution against foreign occupation began 100 years ago in 1919. This followed the Allied victory in the First World War and President Wilson’s advocacy for self-determination of the countries that had been part of the defunct Ottoman empire. Egypt got its independence and the first US Ambassador presented his credentials to the King in 1922. It was also 100 years ago that the American University was founded in Cairo. Today AUC is an Egyptian university that continues to bring the principles of American education to so many leaders of Egyptian government and society.

Forty years ago, USAID began its work in Egypt and it is 70 years since the first Egyptian students went to the United States under the Fulbright program. This set in train the remarkable development partnership and exchanges and connections among our people that we benefit from so much today. Private sector cooperation is just as long lasting and has brought huge benefits to Egyptians as well as Americans. This is particularly evident as our economies and trade and investment boom, bringing jobs and better lives to millions of people.

Eden’s and my five years in Cairo are drawing to a close. We like to think that we have helped strengthen and reinforce the vital security, economic, cultural, and people to people ties between our countries. We have certainly treasured your friendship and hospitality.

Looking to the future, we expect many more landmarks, achievements, and anniversaries for our unique and very special nations. We celebrate and remember the achievements and struggles of the past in order to remind us of our limitless potential as we look forward to our future together as friends and allies.The ingenuity and imagination that took humanity to the moon inspires us to address the many challenges we face on our small planet, even as we look beyond the moon to Mars, the solar system, and the stars.

Thank you all for joining us tonight. Please take advantage of all of the photography and other material and activities about NASA and the Apollo program that are on display. We are delighted that NASA Astronaut Dan Tani could be with us. I hope that you get a chance to meet him.

Eden and I give huge thanks to the hundreds of people who worked tirelessly for months to make this evening possible: overall coordinator Steve Sanders and the Ambassador’s Residence Manager Mirela Odobasic played key roles. Alfred Louis, Eman Mohamed, and Mohamed Mahrous oversaw logistics and decorations. And Haytham Azoz and our excellent protocol team did their usual outstanding job.

Thanks to the Cairo Four Seasons First Residence for the delicious food, Automation Lighting and Sound for the illumination and light show, and Eventya for the floral decorations.

Special thanks to Gala El Hadidi for her beautiful renditions of our national anthems and to the US Air Forces Central Command Band for what I am sure will be a wonderful musical performance.

We especially recognize and thank the many corporate sponsors listed in the program for their generous support.

Have a glorious evening.