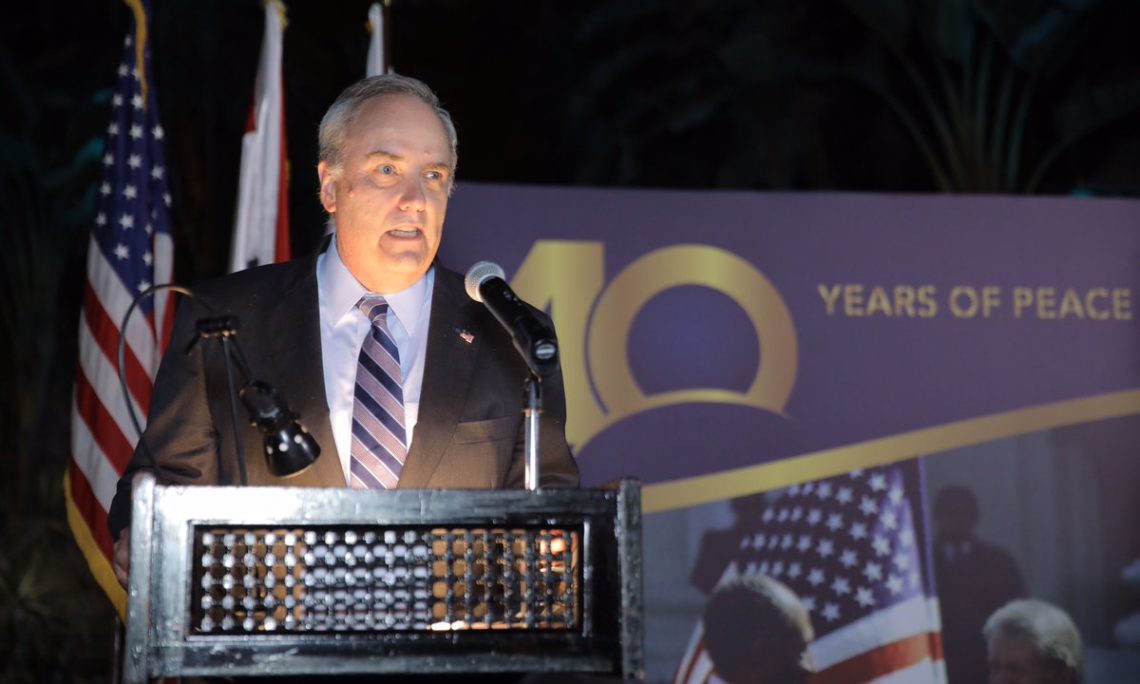 CDA Goldberger's remarks on the celebration of the 40th Anniversary of The Egypt-Israel Peace Treaty at the U.S. Embassy Cairo.

Distinguished guests, ladies and gentlemen, thank you for joining us to celebrate the 40th anniversary of the 1979 Peace Treaty between Egypt and Israel—an agreement that brought an end to decades of war, devastation, and human suffering. The Peace Treaty was preceded by the 1978 Camp David Accords, and was the product of difficult and courageous public and private diplomacy initiated by President Anwar Sadat’s November 1977 trip to Jerusalem. During his famous speech to the Israeli Knesset, President Sadat affirmed to the whole world that “there are moments in the life of nations when it is incumbent to overlook the past, with all its complexities and memories, in a bold drive toward new horizons.” This was the vision and the leadership of a real statesman.

In word and by action President Sadat called for a comprehensive peace based on shared humanity, declaring that, “Any life lost in war is a human life, regardless of whether it is an Israeli or an Arab. Innocent children are deprived of the care and compassion of their parents, be they on Arab or Israeli land. They command our top responsibility to offer them a comfortable life today and tomorrow.”

Sixteen months later, President Sadat achieved the vision of that speech when President Jimmy Carter hosted him and Prime Minister Menachem Begin on the South Lawn of the White House, where they signed the formal Treaty of Peace on March 26, 1979. The United States was a proud partner in and witness to peace then, as it is today. Even if facilitated by President Carter’s personal diplomacy, no peace would have been possible without the matching desire for peace of President Sadat and Prime Minister Begin, who himself embodied the yearnings of his fellow Israelis.

The Treaty ushered in a decades-long period of peace between Egypt and Israel, the full withdrawal by Israel of its armed forces and civilians from the Sinai Peninsula, and recognition of the Gulf of Aqaba as an international waterway. Protracted and costly conflict was eclipsed by peace and opportunity. The signatories of peace were honored by the Nobel Peace Prize. In December 2018, to mark the centennial of President Sadat’s birth, President Trump signed into law the Anwar Sadat Centennial Celebration Act, honoring the late President Sadat with a Congressional Gold Medal, the highest civilian honor bestowed by the United States Congress.

Even with the assassination of President Sadat, and despite the regional rejectionism, Egypt and Israel remained committed to peace, establishing full diplomatic relations in 1982. Egypt’s peace with Israel set the example for the 1994 peace treaty between Israel and Jordan. The Egypt-Israel Peace Treaty also established the Multinational Force and Observers, a unique international organization that has stood the test of time and helped safeguard the peace and build mutual confidence.

Today, a total of 19 international partners, including the United States, provide crucial contributions to the MFO. We salute our international partners (Australia, Canada, Colombia, the Czech Republic, the Fiji Islands, Finland, France, Germany, Italy, the Netherlands, New Zealand, Norway, South Korea, Switzerland, Sweden, the United Kingdom, and Uruguay) for their vital and steadfast support to the MFO.

The Peace Treaty paved the way for the flourishing of American-Egyptian relations, which, over the last forty years, have developed into the robust diplomatic, economic, cultural, and security ties we enjoy today. The United States has supported Egypt with more than $80 billion in security and economic assistance, the cornerstone of our commitment to Egypt’s stability and prosperity as part of our broader commitment to peace in the Middle East.

Through the Foreign Military Financing program, we annually provide Egypt with $1.3 billion to better equip the Egyptian military. Our military ties are deep, steadfast, and growing. We recently concluded another round of bilateral Military Cooperation Committee talks in Washington charting the future of these strategic ties.  Two years ago we resumed the Bright Star military exercise in one of our largest joint engagements. This was followed by a successful U.S. showing of private companies at Egypt’s first ever Defense Expo last year and regular senior level military visits by both sides.

In addition to our military ties, our economic relations are key pillar of our strategic partnership. Through our Agency for International Development, USAID, we have provided over $30 billion in development assistance since the Camp David Accords to educate Egyptians through scholarship, schools, and exchange programs, provide clean water, empower women and entrepreneurs, promote interfaith dialogue, strengthen civil society, restore and salvage Egypt’s cultural heritage, and help communities in need in Upper Egypt, North Sinai and other under-privileged areas.

USAID Administrator Mark Green’s visit to Cairo this week was further validation of the important economic and human partnership between our countries. Just this morning, we launched an unprecedented $90 million program establishing three education centers of excellence that will bring together the American universities MIT, Cornell, AUC and with Cairo, Ain Shams, and Alexandria Universities to work together to find innovative solutions to energy, agriculture, and water supply challenges.

The other leg of our strategic partnership is cultural cooperation and exchange. Each year we send hundreds of Egyptian students and promising leaders to the United States for academic scholarships, such as Fulbright, and for professional exchanges, such as the International Visitors Leadership Program. We bring artists and speakers to Egypt to share their knowledge and creativity with their counterparts. Human ties are a fundamental ingredient of the long-term success and cooperation. We will continue to invest in these transformative relationships.

As Secretary Pompeo said during his recent visit to Cairo, the United States continues to be a force for good in the Middle East. We value our old friends and the values of the dignity of the individual, family and nationhood that we share. Together with Egypt and other regional partners we built an international coalition to defeat the scourge of the so-called Islamic State, liberating millions in our quest for peace and stability in the region. We are working hard with our allies to counteract external interference, particularly the Iranian regime’s malevolent and disruptive agenda.

In his unforgettable Knesset speech, President Sadat cautioned that, “Even if peace between all Arab States and Israel is achieved, there will never be a durable and just peace upon which the entire world agrees in the absence of a just solution to the Palestinian problem.” The United States has been engaged for decades on this issue and continues to work to pursue a better future for the Palestinian people. As Senior Advisor to the President Jared Kushner affirmed during his visit to the Middle East in late February, the United States believes that both Israelis and Palestinians want freedom of opportunity, religion, dignity, and economic prosperity. We believe that Egypt plays a vital part in this process, and we thank Egypt for its valuable and ongoing work for peace.

As Secretary Pompeo declared during his speech at AUC , “It is time for old rivalries to end for the sake of the greater good of the region.” This was President Sadat and Prime Minister Begin’s message to us 40 years ago, and their message remains relevant today. Egyptian and Israeli leaders demonstrated the difficult, but necessary path forward for the benefit of their citizens four decades ago, and their visionary leadership remains a timely and inspirational model for us today.

We congratulate Egypt and Israel for helping to ensure the success of the Treaty of Peace and are very happy to have Ambassador David Govrin with us tonight. The United States reaffirms an unwavering commitment to this important agreement as a necessary historic milestone on the road to broader peace in the region for future generations of Arabs and Israelis. We also affirm our strong and unwavering partnership with Egypt and the Egyptian people as they seek new opportunities to bring lasting stability and greater opportunities for all Egyptians.