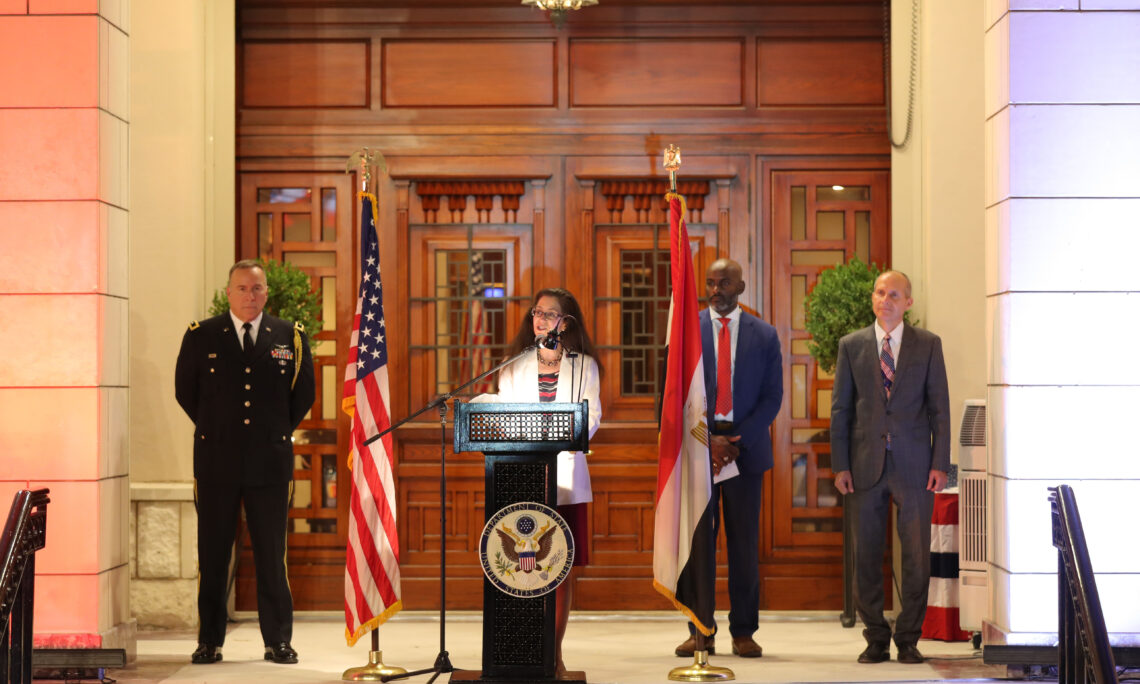 Your excellencies, ladies and gentlemen, friends.  Two-hundred and forty-six years ago, our Founding Fathers put quill and ink to paper to express America’s core values, the unalienable rights of life, liberty, and the pursuit of happiness.

After two difficult years with COVID preventing gatherings such as this, we are delighted to once again welcome our friends and partners to the U.S. Embassy to celebrate America’s Independence Day!

Each year since the 1776 signing of the Declaration of Independence, Americans have come together to celebrate our independence and the rights and values upon which our country was founded.  As Thomas Jefferson said, “For ourselves, let the annual return of this day forever refresh our recollections of these rights and an undiminished devotion to them.”

While tonight is a joyous occasion to celebrate among friends, it is also an opportunity to reflect on the tremendous challenges we are confronting together as a global community.

Many of us worked together in the global fight against COVID.  Early on, Egypt assisted the American people with a donation of protective equipment.  And over the course of the pandemic, the United States developed and donated 25 million COVID-19 vaccinations to Egypt and contributed more than 55 million dollars to support Egypt’s efforts to combat the virus by training healthcare workers; improving tracking, prevention, diagnosis, and treatment of the virus; and distributing vaccines across Egypt.

Then, just as we thought we were about the turn the corner on the worst suffering of the pandemic, another global event reached our shores.  Russia’s unprovoked and unconscionable invasion of Ukraine, an independent, sovereign country that presented no threat to Russia.  By invading Ukraine and terrorizing its population, Russia seeks to strip the Ukrainian people of their independence and their territorial sovereignty.

So as we join together to celebrate the fight for American independence in the 18th century, Ukrainians are fighting to protect their country from a foreign ruler who has openly compared his efforts at conquest to those of an 18th century Russian czar.

When the international community in the 20th century joined together to adopt the United Nations Charter, we affirmed our commitment to put such wars of territorial conquest behind us.  We all know the UN Charter becomes meaningless, however, if we do not preserve and protect this foundational principle.

Lost in much of the commentary about this war are the tragic stories of the Ukrainian people suffering the most.  Stories like those of Ukrainian farmer Pavlo Serhienko, who after losing his father to COVID-19, has watched his family’s wheat farm be bombed and set on fire by Russian mortars.  Much of his land, which has been in his family for three generations, is now too dangerous to cultivate, contributing directly to global food shortages and high prices.

Or stories like the everyday people of Vinnytsia, who were peacefully living their lives until they were bombarded by Russian missiles.  The assault targeted the city’s civilian center, including a cultural center, killing dozens.  According to Save the Children, at least 1800 schools in Ukraine have been completely destroyed or damaged since the start of Russia’s invasion.

Here in Egypt, the United States stands in solidarity with Egypt as it confronts the economic pain caused by Russia’s war.  Building on more than four decades of partnership with Egypt, during which the United States contributed one billion dollars to support Egypt’s agricultural sector, the U.S. Government is currently working with thousands of Egyptian small farmers to enable them to make the most of their wheat harvests with technology, pest treatment, secure harvest transportation, and improved storage capabilities.

And we do not just work closely with Egypt in times of crisis.  For over 40 years, the United States and Egypt have together advanced regional security, prosperity, and development.  Last Saturday, President Biden met with President Al Sisi.  U.S. National Security Advisor Sullivan has visited Cairo twice since September, and Secretary of State Blinken and Foreign Minister Shoukry have been in contact regularly to build on the momentum of last November’s U.S.-Egypt Strategic Dialogue.

Our security cooperation is helping Egypt combat terrorism, defend its borders, and protect the Red Sea and Suez Canal.  Our joint efforts in regional diplomacy are seeking to promote peaceful solutions in Libya and Yemen.

Our commercial partnership is exemplified by the American Chamber of Commerce’s contributions to innovation and corporate social responsibility in Egypt.  And as Egypt prepares to host COP-27, we are working together to advance meaningful climate initiatives and encourage American companies to introduce green technology solutions in Egypt.

Every day people from our embassy work closely with our Egyptian partners to tackle shared challenges and advance shared goals. We value each of our relationships with you and with the organizations you represent.  The United States has, since its inception, been a forward-looking country.  And as we look toward the future, we know that whether it be efforts to advance women’s economic and social empowerment, to spur economic growth, to strengthen security and promote regional peace, and to promote the values of life, liberty and the pursuit of happiness, our world will be a better place as we continue to work together, building on our near half-century of close partnership between the United States and Egypt.

In closing, on behalf of myself and everyone here at the U.S. Embassy, I would like to offer my sincere thanks to our sponsors for their support:  3M, Apache, Bechtel, Cargill, Chevron, Citibank, Coca-Cola, Cold Stone Creamery, ExxonMobil, J.P. Morgan, Lockheed Martin, and Pepsi Co.  And to all our colleagues at the Embassy who made this event possible.

So please join me now in a birthday toast to the United States of America, and to the continued success of the partnership between our two countries!

Thank you all for joining us to celebrate and please enjoy the evening’s festivities.