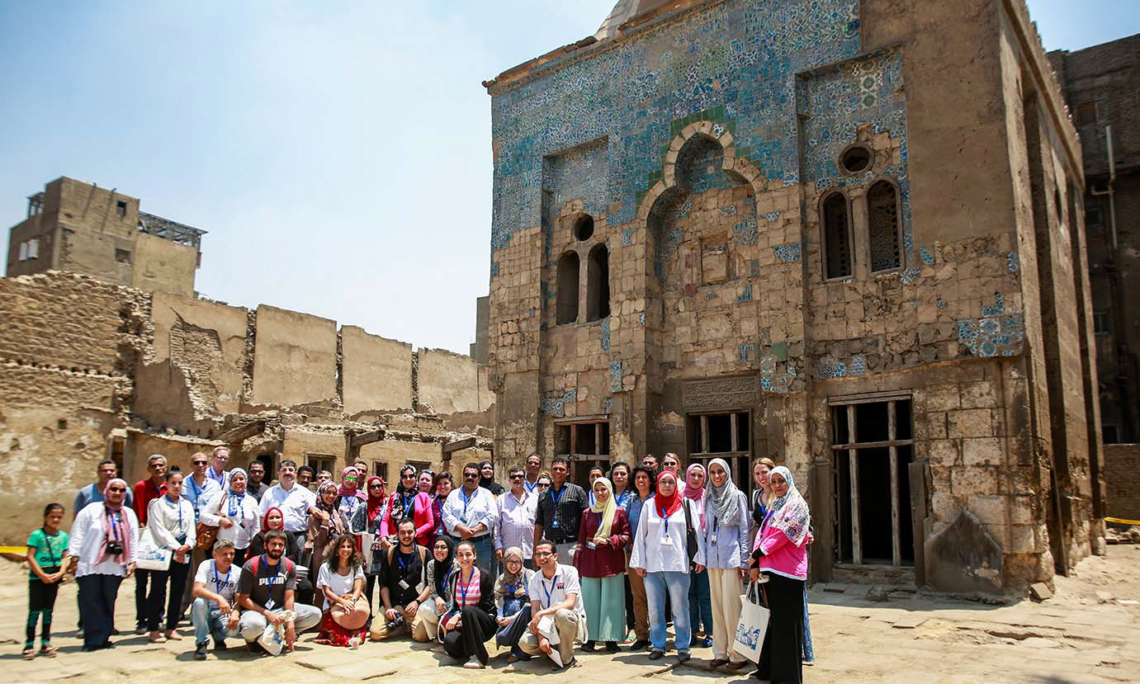 Members of the US Embassy in Cairo, the MoA, Art Jameel Institute, Arab Academy for Science, Technology and Maritime Transport, Turath Community Group, some of the takiya’s neighbors, along with the World Monuments Fund team.

The U.S. Ambassadors Fund for Cultural Preservation (AFCP) supports the preservation of cultural sites, cultural objects, and forms of traditional cultural expression in more than 100 developing countries around the world. Cultural heritage endures as a reminder of the contributions and historical experiences of humanity. By taking a leading role in efforts to preserve cultural heritage, the U.S. shows its respect for other cultures.

Egyptian cultural heritage has been a priority to the AFCP since the inauguration of the program for its rich history and unique heritage sites.

AFCP-supported projects include the restoration of ancient and historic buildings, assessment and conservation of rare manuscripts and museum collections, preservation and protection of important archaeological sites, and the documentation of vanishing traditional craft techniques and indigenous languages. In Egypt, AFCP has supported esteemed local partners on a variety of projects aiming at safeguarding Egyptian tangible and intangible heritage.

In 2003, the AFCP assisted in training officials from the Supreme Council of Antiquities on the use of new technology to help discover new archeological sites. In 2005, the AFCP funded an emergency stabilization project to restore and preserve the 14th-Century Mosque of Aslam Al Silahdar. In 2007, the focus of the fund in Egypt shifted to the documentation of the music of the Hababda and Bashariya tribes in the Halayeb and Shalatin tribes on the Red Sea. In 2009/2010, the AFCP funded the restoration of the historic 19th century Villa Castagli in downtown Cairo. In 2012/2013, AFCP projects have supported preservation of the Greco-Roman civilization in Karanis, Fayoum. In 2015, the grant supported the Conservation of the Mausoleum of Imam al-Shafi’I in Old Cairo.

The U.S. Embassy in Cairo and the Bureau of Educational and Cultural Affairs at the U.S. Department of State are pleased to announce the 2021 call for proposals for the U.S. Ambassadors Fund for Cultural Preservation (AFCP) Grants Program. You can download the Call for Proposals here and the Notice of Funding Opportunity here

Please find here a sample sheet that can be used to format your budget for either proposal.

For information on current activities, to propose a program, or to join our mailing list, please e-mail: cairoculture@state.gov