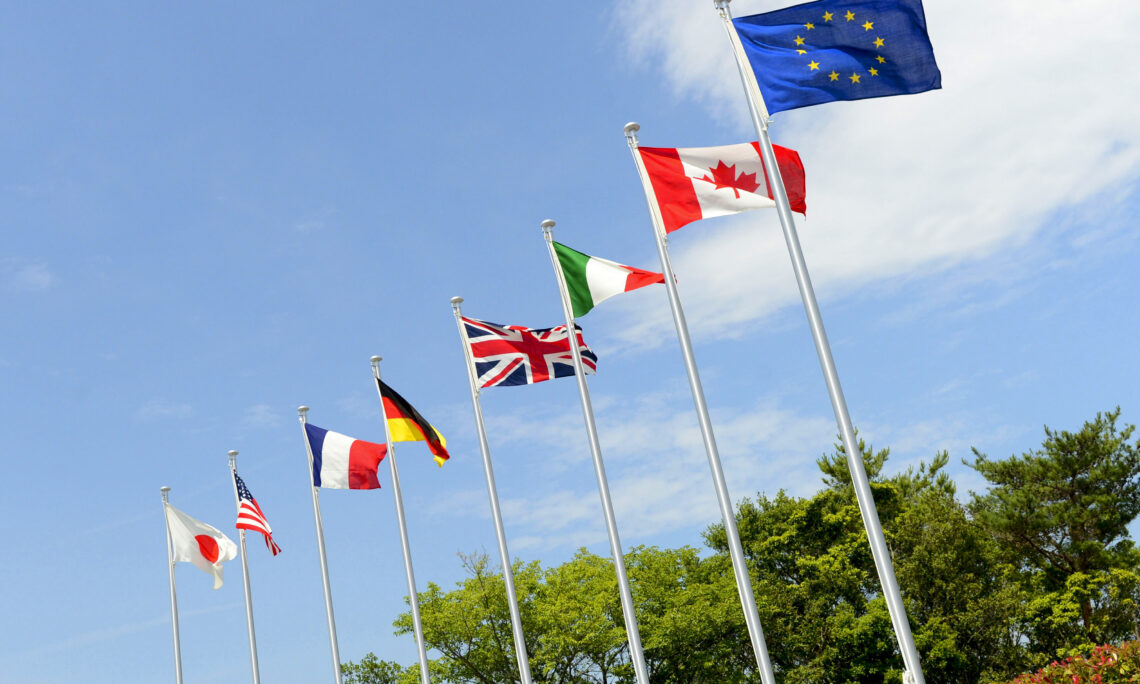 Flags of the G7 Summit.

The Ambassadors of Canada, France, Germany, Italy, Japan, the United Kingdom, the United States and the EU in Cairo

The price for wheat in world markets is at an all-time high, at 160% of pre-crisis levels. All signs point towards even harder challenges to come. It is Russia’s war of aggression on Ukraine that endangers the supply of grain to the world.

The solution to this immediate crisis is thus a simple one: Russia needs to stop its brutal war against Ukraine and withdraw its troops from Ukraine immediately.

The cause of the grain crisis is easily seen in every wheat field that Russian bombs have destroyed, every farmer killed and every Ukrainian ship blocked in Black Sea ports by Russian forces. Because of Russia’s aggression, this season’s yields in Ukraine will decrease by 50 percent and Ukrainian farmers may not be able to sow winter wheat. Twenty million tons of existing grain have been prevented from being exported from Ukraine to countries around the world, including Egypt. To add to the insult, credible reports indicate that Putin’s armies may be transporting wheat out of Ukraine that is intended for countries in dire need of wheat imports to Russian-controlled areas.

Russia itself chose to stop its own exports of many sorts of grain due to the war and decided to only feed “friendly nations” This aggravates the situation further. It also shows that President Putin is fully aware that his aggression threatens the world with hunger. The decision to weaponize food is Moscow’s and Moscow’s alone.

Regardless as to what Russian officials might say regarding cooperation with Egypt, they cannot explain away the hardships this war of aggression is causing in Egypt. Nor can Russia distract from the financial consequences of Putin’s war of aggression which threatens the prosperity and livelihoods of Egyptians.

Russia might announce one or two ships of grain bound for Egypt, yet this only makes it clearer that Putin stopped these exports in the first place. The implicit threat behind this is to support “friendly” countries while punishing the critics of his war of aggression. Food security and nutrition are public goods and hunger should not be used as weapon against the most vulnerable, including on the African continent.

Russia is blaming the sanctions imposed by G7 countries and others for the imminent food crisis. This is false. Our sanctions target those responsible for the war. They exclude food supplies, agricultural commodities and other humanitarian as well as medical goods. They are a means to stop Russia’s war machine, which is causing the global food crisis.

Neighbouring European countries such as Romania and Poland are coming to the rescue by transporting grain by land, as they did for a tender of Egyptian wheat last week. Yet with much lower capacity and at higher cost, this is only an interim solution. The fact ist that Russian warships are blocking Ukrainian ports, where millions of tons of wheat await export.

The G7 is standing by their commitment to support Egypt through this crisis caused by Russia’s war. We are enhancing our cooperation with Egypt to meet this crisis, through increased support to the World Food Program’s activities in Egypt, regional frameworks such as the Global Alliance for Food Security (GAFS) or the Food and Agriculture Resilience Mission (FARM) or support to the Government of Egypt through bilateral assistance like the EU food facility and national frameworks. Russia has failed to offer such support.

We are closely consulting with Egypt and other regional partners on this crisis, for example in the Mediterranean Dialogue on the Food Security Crisis that took place in Rome last week, the May 18 US Secretary of State’s Global Food Security Call to Action Ministerial at the United Nations, the visit to Cairo of European Commission President Ms von der Leyen or the upcoming Uniting for Global Food Security conference in Berlin.

Just as the Egyptian government is actively engaged in securing shipments of wheat and other foodstuffs, the G7 states are at work to keep global agricultural markets open. We support Ukraine in producing and exporting foodstuffs to help alleviate the crisis. Through this, we also stand by the people of Egypt.

Averting this crisis is only possible by exercising every possible influence on Russia. President Putin needs to end his war of aggression and the destruction and blocking of essential food supplies for the world to avoid global hunger.