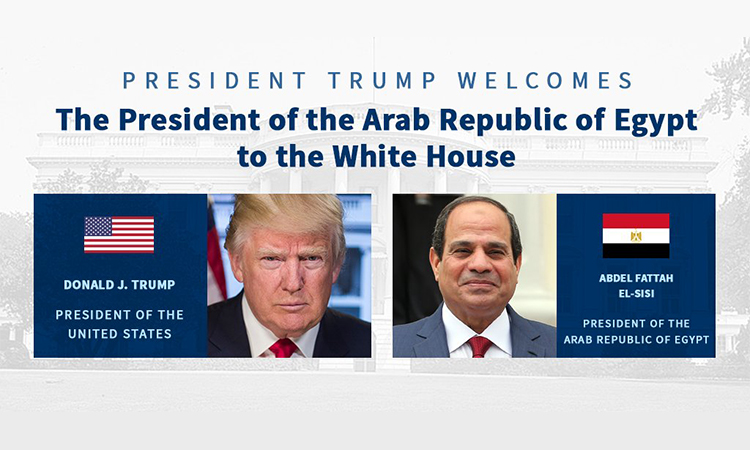 President Donald J. Trump today welcomed President Abdel Fattah Al Sisi of Egypt to the White House to continue efforts to strengthen the United States-Egypt strategic partnership and to mark a new day in the relationship between the countries. The United States and Egypt stand fully committed to addressing critical bilateral and international issues in a spirit of mutual respect and open cooperation. President Trump reaffirmed our deep and abiding commitment to Egypt’s security, stability, and prosperity, and pledged continued support to Egypt’s ongoing fight against terrorism and Egypt’s historic economic reform program.

President Trump and President Al Sisi agreed on the critical importance of advancing peace throughout the Middle East including in Libya, Syria, and Yemen.  They also expressed their mutual interest in supporting the Israelis and Palestinians in moving toward a genuine and lasting peace.

President Trump and President Al Sisi agreed to continue coordinating military, diplomatic, and political efforts to defeat terrorism.  Both leaders recognized that terrorism cannot be defeated solely by military force and pledged to explore ways to address the economic, social, political, and ideological factors that fuel terrorism.  President Trump applauded President Al Sisi’s courageous efforts to promote moderate understandings of Islam, and the leaders agreed on the necessity of recognizing the peaceful nature of Islam and Muslims around the world.

President Trump and President Al Sisi also agreed on the importance of deepening bilateral economic and commercial ties.  American and Egyptian companies have built deep trade and investment relationships, and both countries’ economies stand to benefit from further engagement in the years ahead. Egypt’s ambitious homegrown economic reform plan, backed by a $12 billion agreement with the International Monetary Fund, will help stabilize Egypt’s economy and set the foundation for private-sector led growth and prosperity.

President Trump and President Al Sisi affirmed their governments’ commitments to following up on President Al Sisi’s historic visit and to continue the process of advancing and deepening the United States-Egypt partnership.