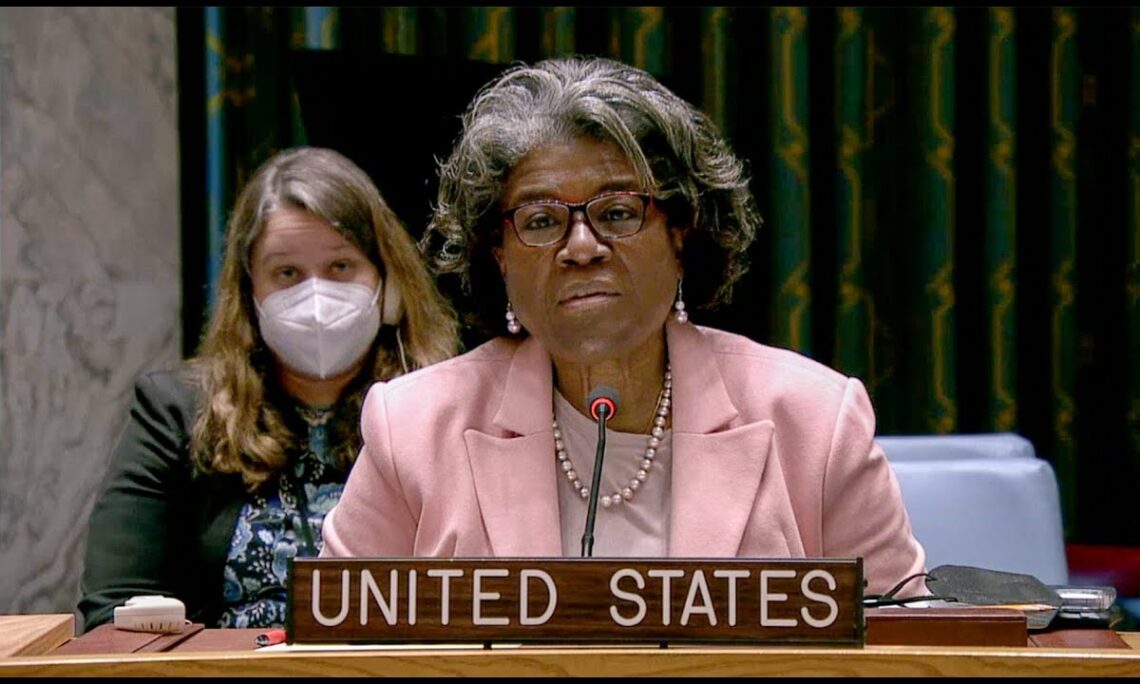 I want to thank Secretary-General Guterres, the League of Arab States Secretary-General Aboul Gheit, and Ms. Alaqil for their informative presentations. I particularly appreciate Ms. Alaqil’s message from youth in the Arab world, and I also welcome the presence of Minister Shaheen.

The Security Council has a critical responsibility to respond to scourge of war and to threats to international peace and security. And to that end, the United States fully supports the ongoing efforts to enhance coordination between the Council and the League of Arab States. Together, we can work to further a stable, prosperous, and secure Middle East. In that vein, we welcome the League’s ongoing engagement in a range of protracted conflicts that continue to upend regional stability and create multiple complex humanitarian crises, including in Libya, Syria, and Yemen.

We also deeply appreciate the important role of League member states in pushing back on Iran’s destabilizing regional behavior. And the United States applauds those members that have recently normalized relations with Israel, including the Abraham Accord countries. I especially want to thank the League of Arab States for its contributions as a member of the Global Coalition to Defeat ISIS. This coalition has brought together 83 countries and international organizations to ensure the enduring defeat of ISIS.

As we continue to respond to COVID-19 around the world, we are also grateful to the League of Arab States for its participation in President Biden’s first Global COVID-19 Summit on ending the pandemic. We look forward to our engagement with Arab Health Ministers later this month. The United States has led the world in supporting COVAX and donating vaccines to countries in need. We have sent nearly 38.5 million doses to League of Arab States members, in partnership with COVAX. COVID-19 remains an immediate global priority and we value opportunities to further engage with the League and its member states on this critical work.

But as we deal with the pandemic, we must also stay laser focused on another grave threat: and that is the climate crisis. As part of that work, we welcome the opportunity to strengthen our collective climate ambitions and accelerate progress towards achieving the goals of the Paris Agreement. We encourage all League of Arab States members to join over 111 other countries in endorsing the Global Methane Pledge with the global collective goal of reducing methane by 30 percent by 2030.

The U.S. is also encouraged by joint efforts undertaken by UN Women and the League of Arab States to support League member states in developing and implementing national action plans on Women, Peace and Security. And we welcome League efforts to aid the region’s youth. Ms. Alaqil, we heard your voice very loudly, and again, appreciate your bringing the recommendations of youth to this forum. When young people lack access to opportunities, when they are marginalized and they are discriminated against, or face security threats, they become more susceptible to recruitment by criminal and terrorist groups.

And lastly, it is deeply regrettable that we meet at a time when the Security Council’s ability to carry out its mandate has been undermined by one of its Permanent Members. The United States condemns, in the strongest terms possible, Russia’s premeditated, unprovoked, and increasingly devastating invasion of Ukraine. And we must stand united in the face of President Putin’s illegal war. And, in that spirit, the U.S. appreciates that a majority of League of Arab States members supported the General Assembly resolution on Ukraine adopted on March 2.

But make no mistake – Russia’s war has global implications. Russia’s devastation of Ukraine’s agricultural fields and the blockade of its ports have already hurt global food security. This is having consequences for the Arab world, including in Yemen, a country that has already endured immense humanitarian suffering. We hope to work with the League of Arab States and other partners to ensure these consequences of Russia’s aggression are addressed.

Today, the humanitarian situation remains dire in Syria with nearly 15 million people in Syria in need of assistance. And we thank Syria’s neighbors for their incredible generosity in hosting Syrian refugees.

It’s clear that we face a host of challenges. But we cannot focus on one challenge and forget some many others that we’re dealing with, and you reminded us of that Secretary General in your remarks. But by acting together, I have no doubt that we will be better poised to meet the moment, to meet all of the challenges that we face, and to find solutions moving forward.

Thank you very much, Mr. President.