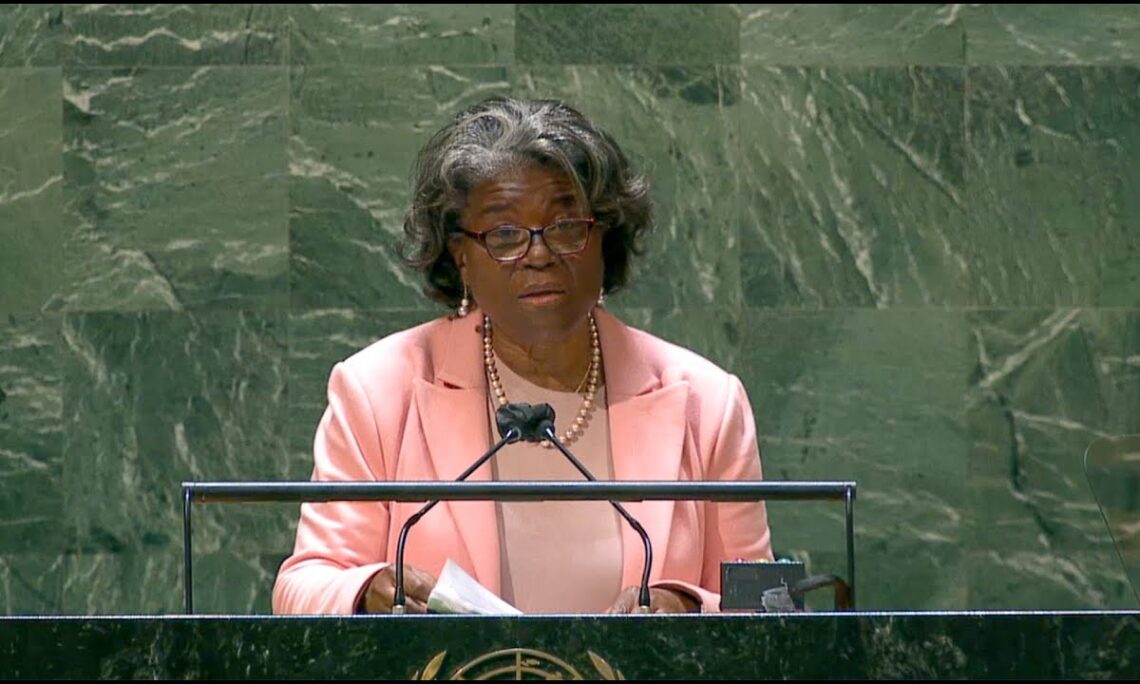 Before I begin, I want to express my great sorrow at learning that former Secretary of State and former USUN Ambassador Madeleine Albright has passed away. Secretary Albright was a mentor. She was my boss, both as Secretary of State; I worked with her in Georgetown. She was a colleague, and she was a friend over several decades. She was a trailblazer and a luminary, and she was the first woman to serve as Secretary of State. She left an indelible mark on the world and on the United Nations. Our country and our United Nations are stronger for her service. I always would say – she used to talk about the pins she wore – I always wore her on my shoulder.

Her story – a story of fleeing Czechoslovakia as a refugee at a young age and rising in the highest levels of the U.S. government – has echoed in my mind amid the current crisis in Ukraine. I hope to do justice for her memory today. I’m sure that we will have an opportunity to remember Secretary Albright and honor her many contributions in the days ahead. But today, I grieve her as my friend and extend my condolences to her family.

So, thank you, Mr. President.

Tomorrow marks one month since Russia launched its full-scale invasion of Ukraine. One month of endless shelling. One month of brutal assaults on kindergartens, orphanages, apartment buildings, maternity wards. One month of relentless attacks that have destroyed infrastructure and left millions of Ukrainians without reliable access to clean water, heat, electricity. One month of spiraling levels of hunger, displacement, and trauma. One month of a purposeless, senseless violence initiated by President Putin, without regard for how many Ukrainian – and Russian – lives would be destroyed in the process.

We need only to look at the plight of people in Mariupol to understand the brutality President Putin has inflicted. Mariupol, once home to nearly a half million people, has been without food, water, electricity, or gas for weeks. In that time, Russia has bombed a children’s and maternity hospital in Mariupol, which witnesses told UN officials was “operational and clearly identifiable” when it was hit.

Media and civilians report that Russian forces went on to bomb a humanitarian corridor, blocking critical, lifesaving supplies from reaching Mariupol. Despite Russia declaring a ceasefire for the evacuation of civilians, we continued to see images of Russian tanks shelling residential buildings, schools, and even a large theater marked in Russian with the word “children” in letters large enough to be visible from the air.

We have heard disturbing reports that several thousand Mariupol residents have been unwillingly transported into camps in Russia, of journalists and local activists being abducted, of widespread shelling and attacks on civilians. Local authorities reported at least 2,400 civilians have been killed – in this one Ukrainian city alone – by Russia since its attacks began. But they know once the fog has cleared, the toll will be much higher.

This week, the UN Secretary-General spoke about the devastation of Mariupol and Kharkiv, and demanded “a thorough investigation and accountability.” We concur and agree fully. Russia’s actions in Mariupol will be investigated thoroughly, and importantly, known by the world as a symbol of Russian brutality, alongside those in Aleppo and Grozny.

A short time ago, Secretary of State Blinken announced that, based on information currently available, the U.S. government assesses that members of Russian forces have committed war crimes in Ukraine.

And the world is bearing witness.

Just yesterday, the New York Times published videos of Russia’s forces in the town of Kherson firing on civilian protesters. We recently learned that Russian shelling killed a 96-year-old Holocaust survivor in Kharkiv. And as the United States has repeatedly warned in recent days, we believe Russia may be planning to use chemical or biological weapons.

It must also be said that we are seeing devastating reports about extraordinary casualties suffered by the invading forces, including of young conscript soldiers. Over the course of his war, President Putin has also inflicted deep injustice against his own people, particularly against these young Russians who were forced to sacrifice their lives for his ego and ambition.

In one month, Russia caused one of the fastest-growing humanitarian catastrophes in the world. According to the UN, over 10 million people – about a quarter of Ukraine’s pre-war population – have now been displaced by this conflict. Twelve million need aid. Five point six million children unable to continue schooling – an entire generation of Ukrainian children affected. In the first few days of the war alone, the UN asked for $1.7 billion for Ukraine and the region. Neighboring countries have opened their borders to more than 3.6 million refugees and counting.

Russia’s war on Ukraine is already disrupting the supply of commodities critical to global food security. The accelerating spike of food prices, food shortages, and corresponding insecurity threatens to further destabilize fragile societies, increase hunger, and drive migration. And this comes at a time when the global humanitarian system was already stretched more than ever before – a time when the World Food Program is feeding more than 138 million people in over 80 countries.

Today is an important moment for the world to stand together in the face of unconscionable violence that has taken a grave humanitarian toll. In front of us, we have a resolution proposed by Ukraine that has a response to this humanitarian catastrophe. It is a text that was negotiated by a diverse cross-regional group of states and is already co-sponsored by over – nearly 90 Member States. The text is clear: In its very first sentence, it reaffirms the UN Charter’s determination to save succeeding generations from the scourge of war.

It is a text about the protection of all civilians, especially those most vulnerable, about support to the neighboring countries that have so generously opened their borders to refugees, and importantly, about supporting the UN and their humanitarian partners’ lifesaving work. It demands the protection of civilians fleeing armed conflict and violence – including foreign nationals – without discrimination. And it demands their voluntary, safe, and unhindered passage.

It calls on all of us to mitigate the conflict’s impact on increased food insecurity globally, especially in Least Developed Countries, as millions of people are facing famine or the immediate risk of famine around the world. It not only calls to fund the UN-coordinated humanitarian response in and around Ukraine, but indeed expresses concern with the entire global humanitarian needs landscape.

An abstention in the face of Russia’s atrocities is unacceptable. Russia must be held accountable for the humanitarian crisis it is creating, which is why, building on the March 2 resolution supported by 141 members of this body, this text demands an end to this war and makes that appeal to the one person – to the one person – with the ability to stop the violence, and that’s Vladimir Putin.

By voting for this resolution, you signal your support for the heroic work of humanitarian personnel providing aid in an impartial and neutral way – and of the UN’s flash appeal to fund their work.

By voting for this resolution, you are demonstrating that you see the impact this conflict is already having on the entire world – on your own countries – by exacerbating food insecurity as Ukraine’s fields lay fallow and ships loaded with grain sit in the port.

By voting for this resolution, you choose to support respect for international humanitarian law and international human rights law and the principles of sovereignty, territorial integrity, and prohibition on use of force enshrined in the UN Charter.

We must have the courage to speak the truth here. This war did not appear out of thin air. This humanitarian crisis was not a natural disaster; it was man-made. Any country that wants to make a serious effort to address the humanitarian emergency in Ukraine must be clear about what is causing that emergency. To do less is to allow the aggressor to obscure itself with vague language and later claim it was actually trying to help.

Russia is to blame for instigating this war. And the world will continue to hold Russia accountable for what they are doing to the people of Ukraine.