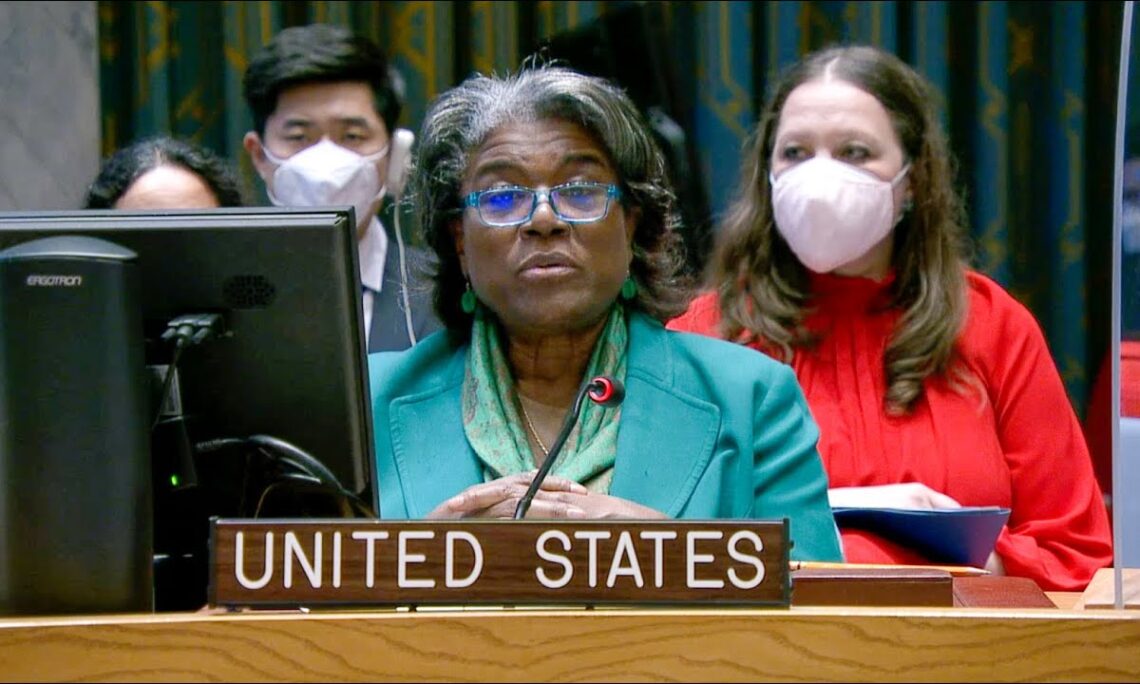 Thank you, Mr. President. And thank you to the briefers for your briefing today.

Just three weeks ago, Russia launched its unprovoked, unjustified, unconscionable full-scale invasion into Ukraine and assault on democracy. Now, over three million refugees have fled the country, creating a devastating humanitarian crisis felt around the world. These refugees are mostly women and children. They stuffed their lives into backpacks and left their homes and everything they knew behind. Today, many of them know that their apartment buildings and streets have been bombed to rubble. And the horrors continue for those who remain in Ukraine.

We just heard from the WHO DG that 43 hospitals have been attacked by Russia – 43 hospitals and health facilities. AP reporters on the ground showed the world a mass grave in Mariupol – a narrow trench filled with the bodies of children. Yesterday, Russian forces dropped a powerful bomb that hit a Mariupol theater where hundreds of civilians were hiding. The Russian word for “children” was written outside the theater, both front and back, in large white letters that could have been seen from the sky. Yet Russian forces bombed it anyway. Local officials have told families to leave their dead relatives lying outside on the streets – exposed to the world – because it is simply too dangerous with the bombs and shellings to hold funerals.

I just met with Ukrainian civil society leaders. They reported that people standing in a bread line, trying to get food to feed their families, were shot dead by Russian soldiers. They reported terror – the terror that Russia is inflicting across Ukraine on the Ukrainian people.

Russia will be held accountable for its atrocities. There is only one way – one way – to end this madness.

President Putin: Stop the killing. Withdraw your forces. Leave Ukraine once and for all.

Yesterday, I listened to President Zelenskyy’s speech to the United States Congress. And I was so moved by his words, his bravery, and his calls for help and for peace. Immediately afterward, President Biden announced another $800 million in security assistance to help Ukraine defend itself. That’s more than $1 billion in the past week alone. We’re not doing this by ourselves. Our allies and partners are fully committed to surging assistance to the Ukrainians. And we are grateful to all of our allies and partners who have opened their borders and their hearts and welcomed Ukrainian refugees.

We are also going to continue to provide humanitarian relief to support people within Ukraine and those who have been forced to flee – including the $186 million in additional assistance that Secretary Blinken announced on Tuesday. Here at the United Nations, we believe the best way to address the humanitarian crisis is through a resolution in the UN General Assembly. The resolution in the General Assembly will reflect the views of the overwhelming majority of UN Member States and Ukraine itself.

The International Court of Justice issued a profound and important order yesterday to the Russian Federation, and we call on Russia to comply immediately. Russia has clearly violated international law by violating the sovereignty and territorial integrity of Ukraine. Russia’s brutal tactics have killed civilians, medics, and some of the journalists who have been showing us all the truth of this war. Russia has attacked so much of what we hold sacred and everything – everything – the United Nations stands for. Russia’s actions must be condemned in no uncertain terms.