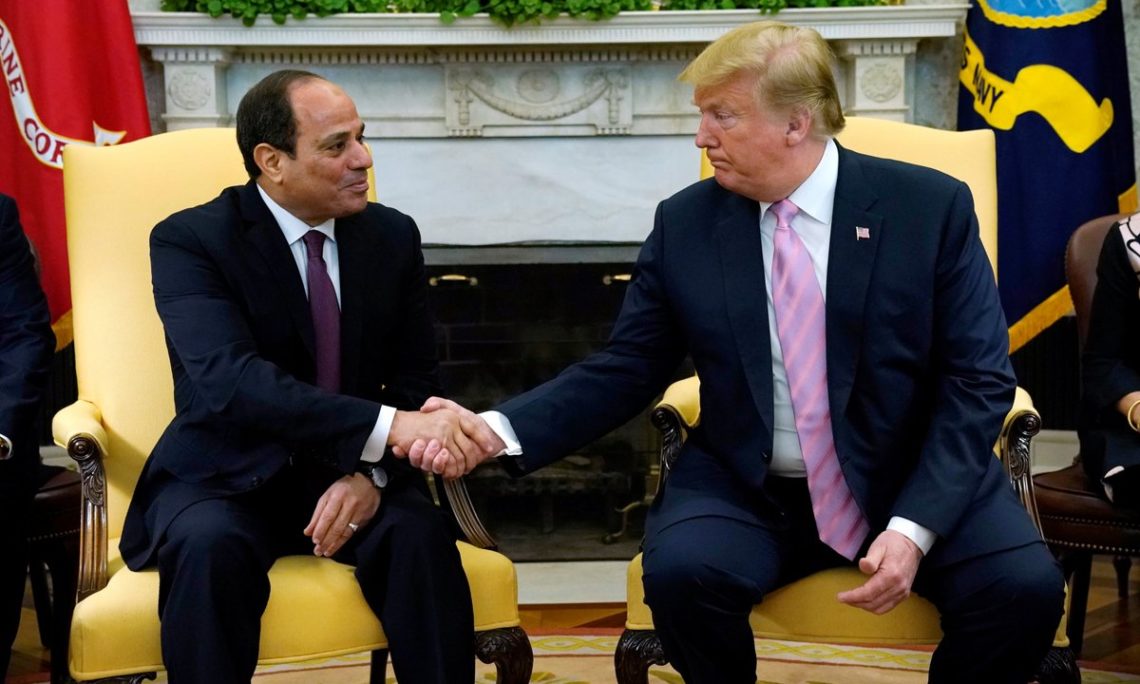 PRESIDENT TRUMP:  Thank you very much.  It’s a great honor to be with President Al Sisi of Egypt.  We have many things to discuss, as you can imagine: military, trade.

And I have to say that a lot of progress has been made in a lot of different ways, in terms of terrorism and others things, with Egypt and within Egypt.  It’s really incredible what’s happened, especially in certain respects that we’ve already talked about.  But we will be meeting with representatives of the President and of Egypt in a little while.

Again, we have very, very important things, militarily, to talk about.  And also about trade.  A big trading partner.  We do a lot of work together.  We work together.  And I think we’ve never had a better relationship — Egypt and the United States — than we do right now.

So, I want to thank everybody for being here.  And, Mr. President, thank you very much.

PRESIDENT AL SISI:  (As interpreted.)  Thank you, Mr. President.  Allow me to express my thanks for your kind invitation and for providing me this opportunity to meet and talk about making a quantum leap in the strategic relationship between Egypt and the United States.

Let me emphasize, Mr. President, that the relations have not been better over the years of our bilateral relationship, and that is why I’m extending, Mr. President, to you our thanks, appreciation, and greetings for (inaudible).

All the credit goes to you, Mr. President.  Thank you very much for your support on all fronts.  This is what we’re seeking to promote our bilateral relations in various fields: political, economic, military, cultural, and others.

PRESIDENT TRUMP:  Well, thank you.  And I just have to say, before we perhaps take a couple of questions, the First Lady was recently in Egypt.  She was treated beautifully.

But maybe even more importantly, what she saw with the Pyramids was — you could call it the seventh wonder or the eighth wonder of the world.  She thought it was incredible.  She thought it was one of the most incredible things she’s seen.  And we have lots of pictures, and that was great day and a great moment to see the Pyramids — the Great Pyramids.

So hopefully a lot of people will be going and looking at them.  But she’s not easily impressed; she was very impressed.

So thank you very much.

Q    You seem to be cleaning house at DHS.  What would you like to achieve with the new leadership there?

PRESIDENT TRUMP:  Well, I never said I’m “cleaning house.”  I don’t know who came up with that expression.  We have a lot of great people over there.  We have bad laws.  We have a judge that just ruled, incredibly, that he doesn’t want people staying in Mexico.  Figure that one out.  Nobody can believe these decisions we’re getting from the Ninth Circuit.  It’s a disgrace.

And so we’re fighting the bad laws, the bad — the bad things that are coming out of Congress.  You have a Democrat Congress that’s obstructing.  You talk about obstruction — the greatest obstruction anyone has ever seen.  All they have to do is spend 20 minutes and they can fix this whole problem.

We have the worst laws of any country anywhere in the world, whether it’s catch and release or any one of them.  I mean, I could name — I could sit here and name them, but if you got rid of catch and release, chain migration, visa lottery — you have to fix the asylum situation; it’s ridiculous.  You have people coming in, claiming asylum.  They’re all reading exactly what the lawyer gives them.  They have a piece of paper.  “Read what that is.”  And all of the sudden, you’re entitled to asylum.  And some of these people are not people you want in our country.

So it’s a terrible thing.  The Democrats in Congress — what they’re doing and the obstruction — they don’t want to fix it.  And we have to fix it.  They want open borders.  They want to have millions of people pouring into our country.  They don’t even want to know who they are.

But our job could be so much easier.  I think Kevin is going to do a fantastic job.  He’s Acting, but I think he’s going to do a fantastic job.  And we’re not doing anything very big, as far as — what we need: homeland security.  That’s exactly what we want.  There’s no better term; there’s no better name.  We want homeland security and that’s what we’re going to get.  Thank you all very much.  Thank you.

Q    Egypt is ordering more fighter jets from Russia.  How do you feel about that?

PRESIDENT TRUMP:  Thank you very much, everybody.

Q    Are you considering child separations, sir?  Can you rule that out, Mr. President?  You wouldn’t start separating the children again, would you, Mr. President?

PRESIDENT TRUMP:  Obama separated the children, by the way.

Q    Would you consider doing it again?

Now, I’ll tell you something: Once you don’t have it, that’s why you see many more people coming.  They’re coming like it’s a picnic because “let’s go to Disneyland.”  President Obama separated children.  They had child separation.  I was the one that changed it.

Okay.  Thank you very much.

PRESIDENT TRUMP:  We’re not looking to do that.  No.

PRESIDENT TRUMP:  We’re not looking to do that.  No.

Q    You’re not looking to bring it back?

But President Obama had the law.  We changed the law.  And I think the press should accurately report it.  But, of course, they won’t.

Thank you all very much.  Thank you.

PRESIDENT TRUMP:  Thank you very much.

Q    Do you support his efforts to stay in power longer?

PRESIDENT TRUMP:  I don’t hear you.

Thank you very much, everybody.  Thank you.