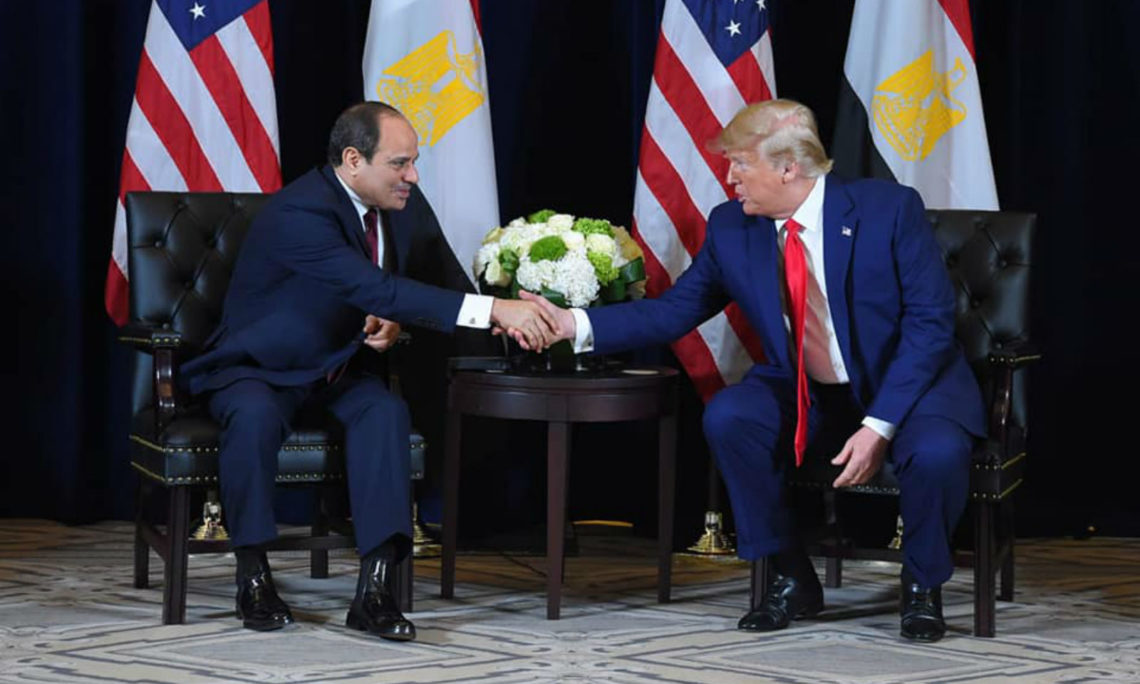 PRESIDENT TRUMP: Well, thank you very much. It’s an honor to be with my friend, the President of Egypt. And he is a real leader. He’s done some things that are absolutely amazing in a short period of time. When he took over not so long ago, it was in turmoil. And it’s not in turmoil now.

So, I just want to say: We have a long-term, great relationship. It’s better than ever before. We’re doing a lot of trading, a lot of business. We’re talking about many different locations like Libya. I think Libya might just be a subject that we’re going to be discussing. I have a feeling.

And the relationship is great. It’s great to have you. Thank you very much, Mr. President.

PRESIDENT EL-SISI: (As interpreted.) I thank you, Mr. President. It’s a great pleasure to have this meeting with you. And this is the second meeting in less than two months. This speaks volumes —

PRESIDENT EL-SISI: — of the level and depth of understanding, and the great appreciation that I hold for your country.

PRESIDENT TRUMP: Thank you all very much. Thank you.

Q Mr. President, are you worried about the demonstration in Egypt that’s calling for President El-Sisi to go?

Q Yes, in Egypt, that’s been calling for President El-Sisi to go.

PRESIDENT TRUMP: No, I guess everybody has demonstrations. Even your best friend in the whole world, President Obama, he had a lot of demonstrations.

No, I’m not — I’m not concerned with it. Egypt has a great leader. He’s highly respected. He’s brought order. Before he was here, there was very little order. There was chaos. And so I’m not worried about that at all.

Q Mr. President, did Sheldon Adelson or any other Republican donors ask you to tone down your trade dispute with China just because they’re concerned about the economy or the impact?

If my opponent had won the election, China’s economy would have surpassed the United States by now. And with me, there’s a tremendous difference. We’re way number one, and China is number two. And China is going to do fine. We’re talking to China. We have very serious conversations coming up, Steve. You might want to talk about that for just one second.

SECRETARY MNUCHIN: We’re meeting with the Vice Premier. He’ll be coming to Washington, D.C. next week. We look forward to those conversations. We had a deputy-level meeting. And as the President has instructed us all along, if we can get the right deal, we’ll do it. If not, we’re perfectly comfortable where we are.

PRESIDENT TRUMP: China wants to make a deal. They have a lot of people that don’t have jobs now because their supply chain is broken. And we’ll see what happens. But they’re also starting to buy our agricultural product. They’re making a big move toward buying our actual — you know, our product, and the ag product. And I appreciate that very much.

I was telling people to tell President Xi we appreciate it. But they are starting to buy our agricultural product. And China wants to make a deal. We’ll see what happens.

Q Did Adelson try to contact you about this issue?

PRESIDENT TRUMP: I don’t want to say that.

Q President Trump, is there any opportunity to have a meeting with the French President regarding Iran?

PRESIDENT TRUMP: Well, Emmanuel is a friend of mine. And he can always have a meeting. And we’ve had to turn down many meetings, because for some reason, everybody wants to meet with us. And I consider it a great honor. But they want to meet.

The United States is doing really well. Everybody wants to meet with the United States. We can’t do everybody. So we’ve turned down, unfortunately, far more than we can do. We’ve had a lot of meetings today — the bilats.

But Egypt is a very special place, a very important place. I think you have the largest population anywhere in your part of the world, by far.

Q Mr. President, is it possible to ask a question of the Egyptian President of whether he has any comments, sir, on the demonstrations going on right now in your country?

PRESIDENT EL-SISI: (As interpreted.) Let me say that you will always find something like this in our region, especially with political Islam. There have been efforts that have been put forth for many years to make sure that this political Islam is having a role on the political arena. And, consequently, this part of the world will remain in a state of instability as long as political Islam (inaudible).

Well, I want you to rest assured that, especially in Egypt, the public opinion and the people themselves are refusing this kind of political Islam to Egypt. They have demonstrated their refusal before, and they refuse those to have control on the country for only one year.

Q The French President is trying to play this mediation role with Iran. Is that something you support or something that will work?

PRESIDENT TRUMP: We don’t need a mediator. Iran wants to do something, and I don’t think we need a mediator. He’s a friend of mine. But we’re not looking for any mediators. They know who to call.

Q Mr. President, is there a scenario where you could meet President Rouhani this week in New York?

PRESIDENT TRUMP: Well, we have no meeting scheduled. Somebody said they’d like to meet. There was some talk about Yemen. All of the sudden, they want to get out of Yemen. That’s a good thing. I just heard that a little while ago, as you probably heard it.

We’ll see what happens. But we have nothing scheduled at this moment.

Q But you wouldn’t rule it out?

PRESIDENT TRUMP: I never rule anything out. Why would I do that?

Q Mr. President, the Chinese delayed a trade delegation visit of farming communities, I believe in Nebraska and another state. Can you comment on that and whether you see that as a good sign, bad sign, neither?

PRESIDENT TRUMP: Well, they’re starting to buy a lot of our ag product. But, Steve, could you maybe —

SECRETARY MNUCHIN: That was actually at our request they delayed that. So, we didn’t want there to be any confusion. They have started buying agriculture. They’re going to reschedule that at a different time. The timing didn’t work. But that was — that was purely at our request.

PRESIDENT TRUMP: Why was that our request? Just out of curiosity.

SECRETARY MNUCHIN: We didn’t want confusion around the trade issues.

PRESIDENT TRUMP: Yeah, but I want them to buy farm products.

PRESIDENT TRUMP: They’ve committed to buy a lot of agriculture, and they’re going to start, and they’ve started. And we should get them over there as soon as possible so they can start buying.

But they have already started buying, as you know and as you’ve heard, a lot of product from our farmers, our ranchers. Okay?

Thank you very much. Thank you everybody.