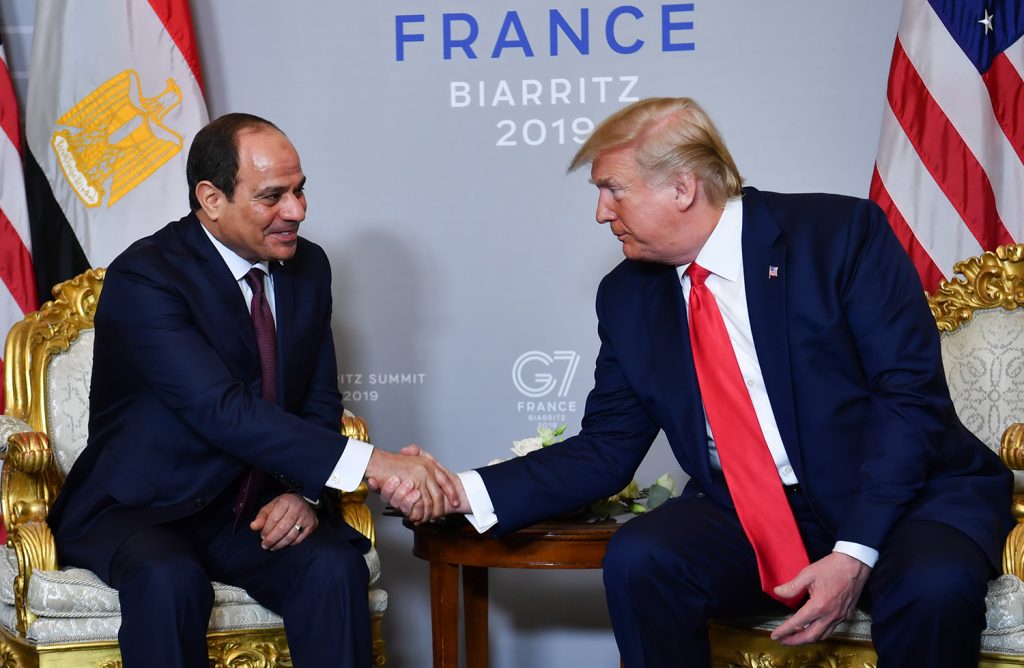 PRESIDENT TRUMP:  Thank you very much.  It’s a great honor to be with President El-Sisi, who’s a friend of mine for now a long time, it seems, right?  From even before the campaign.

PRESIDENT TRUMP:  We met during the campaign, a little before the campaign.  And we got along right away.  I didn’t actually ask for an endorsement, but I think if I would’ve asked, I might have gotten it.  (Laughter.)

We understood each other very well.  He’s a very tough man, I will tell you that.  But he’s also a good man, and he’s done a fantastic job in Egypt.  Not easy.

So we’ll be talking, today, trade.  We’ll be talking military.  A lot of things are happening in your part of the world, as usual, unfortunately.

And also, very big things are happening with China.  You probably read the breaking news a little while ago that they want to make a deal — they just came out — and they want calm.  And that’s a great thing, frankly.  And one of the reasons that he’s a great leader — President Xi — and one of the reasons that China is a great country is they understand how life works.  And that was just announced.

In the meantime, Egypt has made tremendous progress under a great leader’s leadership.  It’s what it’s all about.  And your staff also, who I’ve gotten to know — fantastic people.  So I want to thank you and I want to congratulate you.

PRESIDENT TRUMP:  Thank you very much.  One of the things we’ll be discussing — one of the things we’ll be discussing will be trade.  And I can’t underestimate or speak more highly of the trade deal we made yesterday with Japan.  It’s an incredible — an incredible deal.  It’s a massive deal, especially for our agriculture — our farmers, our ranchers — and e-commerce.  A big e-commerce component that is very important.

But it’s a fantastic deal.  It’s a tremendous deal.  It came at a great time.  And we’ve been helping the farmers anyway, but it’s something that really has impressed me very much, Mr. President.  Our farmers, they don’t want to take.  They want to produce.  They want to be able to do their work.  They don’t want anything for nothing.  They’re incredible people.  I call them “great American patriots.”  And they’ve been really — the job they’re doing is something very special.

So we made a very big deal yesterday with Japan, and it is — it’s one of the biggest trade deals you’ll ever see.

Okay.  Do you have anything further to say?  Okay, thank you very much.

Q    Mr. President, can you tell us about the China call that you referred to?  When will the next round of negotiations start?  And did you speak to President Xi?

Q    Mr. President, can you tell me why the Palestinian Authority has been taken out of the U.S. State Department website?  And how is it conducive to the peace —

PRESIDENT TRUMP:  Go ahead.  What was your question?

Q    Mr. President, I asked you: Could you tell us a little bit more about the call you referred to?  When will the next round of negotiations with China start?

So we are going to start talking very seriously, and we’ll see how that goes.  We’ve had a lot of good things.

Q    Are you speaking to President Xi directly?

PRESIDENT TRUMP:  I don’t want to say.  I can’t comment on that.

Q    Do you have any response to Foreign Minister Zarif being here yesterday?  Were you surprised that he was here?

Q    Some of your allies, though, are saying that it was disrespectful for Macron to invite Zarif —

PRESIDENT TRUMP:  No, just the opposite.

PRESIDENT TRUMP:  He asked my approval.  President Macron asked my — we have a very good relationship.  Look — you know, that’s another thing you got wrong.

I mean, we had — this was the best meeting we’ve had with President Macron, in France.  It was straight up — now, we’re not finished yet.  We have another, sort of, a day left.  We have a lot of meetings, including with the President of Egypt, which I’m looking forward to.  And I’m meeting with Angela Merkel in a little while.  And we’re meeting with a few others.  And we have some very important meetings planned, plus we have some sessions.  And then we’ll have a news conference if you so choose.

PRESIDENT TRUMP:  But on the Macron — no, no, that was — he spoke to me.  He asked me.  I said, “If you want to do that, that’s okay.”  I don’t consider that disrespectful at all, especially when he asked me for approval.

Q    Mr. President, President El-Sisi is an important figure in the U.S. peace —

Q    Can you speak about that and whether taking Palestinian Authority out of the State Department’s website list of countries is conducive to that?

PRESIDENT TRUMP:  Well, you can ask Mike Pompeo, Secretary of State.  And he’s working very, very hard on that situation, and very competently.  And if you look and see what’s going on with the Palestinians and with Israel, we’d like to see if we can make a deal.  It’s very — it got complicated by the Israeli elections, but we’re going to know who the Prime Minister is going to be fairly soon.  It’s happening along.  That was a complicating factor.

I think the Palestinians would like to make a deal.  As you know, I cut off most funding to the Palestinians — a lot of funding.  And I think they’d like to get it back.  I think they’d like to make a deal.  We’ll see what happens.  Nobody has ever done that before.  They used to negotiate paying a fortune of money — $750 million.  They’d pay, pay, pay.  And they’d be treated with disrespect, but they’d keep paying.  This went on for years.  So I don’t believe in that.

We cut off their funding — a lot of it.  And we’ll see what happens.  But I think they want to make a deal, the Palestinians.  And I think Israel would like to make a deal too.

Q    Are you confident that it’s going to be released right after the Israeli election?

PRESIDENT TRUMP:  Oh, I don’t — you mean the deal?

PRESIDENT TRUMP:  No, of course not.  It won’t be before the election, I don’t think.

PRESIDENT TRUMP:  But I think you may see what the deal is before the election.  But I — and I think a deal will happen.  But everybody says that that’s a deal that can’t be made.  They always refer to that deal — Israel and the Palestinians; there’s tremendous hatred for many, many decades.  And everybody says that is a deal that cannot be made.  So we’ll see if we can make it.

PRESIDENT TRUMP:  I don’t want to comment on that.  But I knew he was coming in and I respected the fact that he was coming in.  And he met with President Macron.  And Iran has got a very difficult situation.  They’re in a position that’s not a very good position from the standpoint of economics.  And that’s okay, because we can clear that up very quickly.

I’m looking to have a really good Iran, really strong.  We’re not looking for regime change.  You’ve seen how that works over the last 20 years.  That hasn’t been too good.  And we’re looking to make — make Iran rich again.  Let’s — let them be rich.  Let’s let them do well, if they want, or they can be poor as can be.  They can be like they are now.

MINISTER SHOUKRY:  Not here, but I’ll —

PRESIDENT TRUMP:  Okay, explain to him, one hundred — $1.8 billion in cash.  Will you take it?  Egypt will take it.

Q    Mr. President, what’s the next step, then, with Iran, from your perspective?

PRESIDENT TRUMP:  Well, we’ll see what happens.  You know, it’s all very new.  They’re under a lot of financial stress.  We put sanctions.  Secretary of the Treasury is here right now.  And he’s, really, very expert at what he does.  And he’s done a very effective job.

If I hadn’t won, our economy now would have been overtaken by China.  And all these clowns that are sitting on television that have been running this government for many years, that have been taken to the cleaners by China, they’re all sitting there saying, “Well, I don’t think the President is negotiating properly.”  They don’t know what they’re talking about.

PRESIDENT TRUMP:  And as far as Iran is concerned, that was with great respect.  And I spoke to President Macron yesterday, and I knew everything he was doing, and I approved whatever he was doing.  And I thought it was fine.  And I think it’s too soon to meet.  I didn’t want to meet.  I said, “I don’t want to meet right now.”  But it’s soon going to be time to meet with Iran, and it’s going to be a great thing for Iran.  They have a great potential.

Q    You didn’t want to meet with Zarif, but did you send a message to him on Iran at all?

Q    Are you considering French wine tariffs, Mr. President?  Is that a possibility?

PRESIDENT TRUMP:  Am I going to tariff French wine?

PRESIDENT TRUMP:  Well, it depends on the deal we work out on the digital tax.

Q    And on Iran, sir, are you willing to waive oil sanctions in order to get Iran to the table?

PRESIDENT TRUMP:  I’m not going to tell you what I’m willing to do.  But Iran has a chance to really build themselves up and be a very great nation — greater than before.  But they have to stop terrorism.  That is your number-one nation of terror.  Now, not in the last year and half, two years, because they can’t spend like they used to spend.

They took President Obama’s $150 billion and they doled it out to terrorists all over the place.  I think they’re going to change.  I really do.  I believe they have a chance to be a very special nation.  I hope that’s true.

Q    Mr. President, can you speak about the trade deal with Japan?  Many are commenting that the Japanese Prime Minister seemed less enthusiastic than you.  Can you ensure that he’s actually onboard with this?

But we have a lot of cards with Japan.  Number one is my relationship with Prime Minister Abe.  So I don’t think we have to use the cards.  But the ultimate card is they send us millions and millions of cars.  Essentially, it’s 2.5 percent, but there’s ways of getting around it.  Essentially, non-tariff, free.  Now, if I won’t to put tariffs on those cars, I’d make so much money for this country, your head would spin.

So, yeah, he’s going to make the deal.  I feel pretty certain about that.  That’s what I do.  We have cards.

Q    Are you planning to eventually take off the 2.5 percent auto tax?

PRESIDENT TRUMP:  Nobody has ever asked me that question but you.  Why would I do that?  Tell me.  Why?

Okay?  Thank you very much.  Thank you.  We’ll be having a press conference.