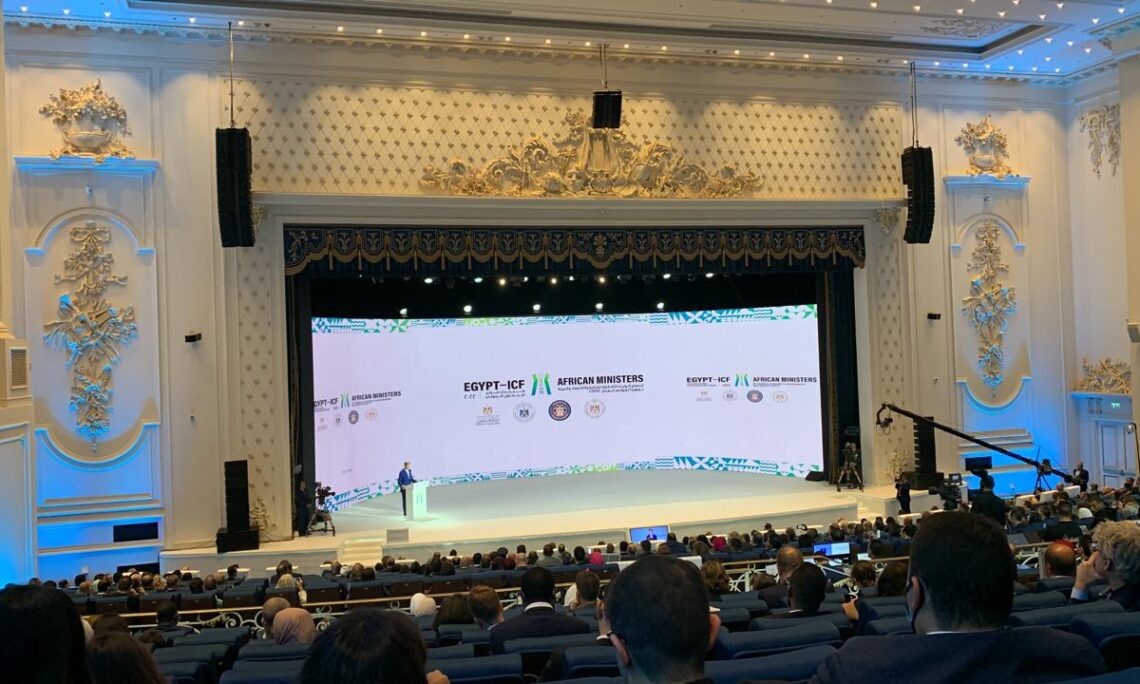 Thank you for that introduction. On behalf of President Biden, I bring you all the goodwill of the United States and a greeting of peace: As-Salaam-Alaikum.

I am honored to be hosted here by President al-Sisi, who has demonstrated critical leadership in mobilizing international climate action and accelerating the clean energy transition.

Thank you also to the entire Government of Egypt, not just for inviting me back a second time this year, but for sharing our urgent climate message in countries and meetings around the world – at COP26, at the One Ocean conference in France, at the UN Ocean Conference in Lisbon, just to name a few.

I know Egypt is often referred to as “Mother of the World,” the place that established much of our early civilization. Now, as we approach COP27 in Sharm el-Sheikh, you have a chance to be the nation that helps rescue civilization and to protect it for many generations to come.

Those, my friends, are the stakes. This fight is existential — it is about the very future of our civilization. Which is why, this fall and beyond, we must do everything in our power to give life to the Glasgow Climate Pact.

What does this mean?  It means delivering on existing commitments, strengthening commitments that are not strong enough, plus creating new commitments and efforts where none exist.

Despite our progress, we all know that much more needs to be done. We aren’t doing enough on mitigation or adaptation.

On mitigation, despite significant progress, we are behind in our efforts to do what the science tells us we need to do to keep 1.5 degrees alive. In 2021, the world used 9% more coal than in 2020, with nearly 300GW of new coal power in the construction pipeline.  And many key emitters have not yet strengthened their NDCs, per the Glasgow Climate Pact.

And, in terms of adaptation, we are seeing impacts in every country in the world:

China is in the middle of the worst drought on record — the Yangtze River, the longest in Asia, is at its lowest level in history.

Europe is in the middle of its worst drought in 500 years — you can now walk across the Rhine River.

In the U.S. alone this year there have been nine — nine! — climate impacts that cost more than $1 billion.

Here in Africa, you see the urgency of this moment.  17 of the world’s 20 most climate vulnerable countries are on this continent.  This year has seen devastating floods in South Africa, Mozambique, and Uganda kill hundreds and displace tens of thousands.  Meanwhile, the Horn of Africa is in its fourth year of drought, with more than 18 million suffering food insecurity as a result.

So what is the United States doing about it?

President Biden has made addressing the climate crisis a top priority.  He rejoined the Paris Agreement on Day One and set an ambitious NDC target. He passed a $1.2 billion Infrastructure Bill. And this summer, he signed the Inflation Reduction Act, the most important climate legislation in United States history.

This is the single largest investment and most significant legislation for climate and clean energy solutions in U.S. history, and it will position America to achieve President Biden’s bold goals.

At COP 26, recognizing the importance of climate adaptation, President Biden released his Emergency Plan for Adaptation and Resilience, PREPARE, which aims to help more than half a billion people in developing countries adapt to and manage the impacts of climate change by 2030.

In Africa, with the world’s fastest growing populations and fastest growing economies, adaptation is lives saved – it’s jobs created – and it’s also common sense. Roads, bridges, and ports can only spur economic growth and reduce poverty next year if they are built for a growing and warming world.

Next week I’ll be traveling to Nigeria and then Senegal, where I will attend the African Ministerial Conference on the Environment, or AMCEN, alongside many of you.

Iam going to hear from African ministers firsthand about their key priorities and concerns, including in relation to adaptation and finance.

And we will have much more to say about adaptation and the United States’ work to support it.

Now, let me turn to the incredibly important issue of finance.

First, we remain strongly committed to the goal of mobilizing $100 billion annually for developing country mitigation and adaptation. President Biden has requested $11 billion for climate finance in his budget request to Congress for the next fiscal year. The United States will do our part to meet the $100 billion goal.

Second, we need to work with governments and the private sector to mobilize trillions of dollars to accelerate the net-zero transition as well as to advance climate resilience. It is going to take all of us, and that is why I am happy to be here in Egypt today, as you exercise your global leadership to bring together investors, multilateral development banks, philanthropists, and government to take bold action.

Here’s the bottom line: the IEA tells us we need to invest $4 trillion, every year, in this transition. No government on earth can fully fund that level of investment – we can only get there with the full participation of the private sector.

In 2021, only about $755 billion was invested globally in the energy transition; that was a record, but only one-third of what we need to meet our 2030 goals.

Our Egyptian hosts are developing a new model to do just that. Through their “Country Platform for NWFE Program,” Egypt is identifying priority climate investment areas and working with partners to develop bankable programs. In total, this has the potential to attract billions in investments from donor governments, philanthropy, development finance institutions, and the private sector – it’s exactly the kind of innovative thinking we need.

And in addition to financing solar and wind farms and retiring coal plants, we also need capital to invest in innovation to scale and bring the next generation of technologies to market.

That’s why we were pleased to see Mark Carney and so many other leaders in finance step up through the Glasgow Financial Alliance for Net Zero.   GFANZ represents some $130 trillion in assets and are prepared to align their capital with this transition – at the speed and scale we need.

And to deploy that money, governments are going to need to continue to work hand in hand to put together blended finance and de-risk those investments.

That is the kind of leadership and ambition we need — in the United States, Egypt, and around the world.

It is a big agenda, my friends, with success measured not just this year, at COP27, but beyond – and ultimately, in whether we do achieve for future generations a safe, stable, clean planet.

Egypt understands both the devastating costs of inaction — especially to critical parts of this nation like the Nile River Delta — as well as the enormous opportunities — in better health, less pollution, and economic development — of acting.

It will be a tall task. But I know we can win this fight.

It is rare in public life to be able to make decisions that impact not just our own nations, but the fate of the planet for generations to come. Fortunately, that is nothing new for Egypt since you began our history as a civilization thousands of years ago. Today, we have a chance to build on that legacy, and make a new one of our own.

So let’s get to work. Thank you.