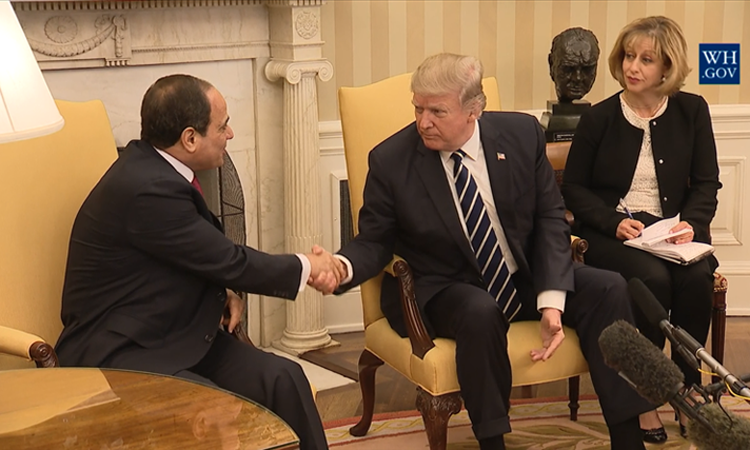 PRESIDENT TRUMP:  It’s great to be with the President of Egypt.  And I will tell you, President al-Sisi has been somebody that’s been very close to me from the first time I met him.  I met during the campaign, and at that point there were two of us, and we both met.  And hopefully you like me a lot more.  But it was very long.  It was supposed to be just a quick brief meeting, and we were with each other for a long period of time.  We agreed on so many things.

I just want to let everybody know, in case there was any doubt, that we are very much behind President al-Sisi.  He’s done a fantastic job in a very difficult situation.  We are very much behind Egypt and the people of Egypt.  And the United States has, believe me, backing, and we have strong backing.  We are very much — and as you and I will be soon talking — we’re building up our military to a level that will be the highest — probably the highest that we’ve ever had — plane orders, ship orders, aircraft carrier orders.

And I just want to say to you, Mr. President, that you have a great friend and ally in the United States and in me.

Your Excellency, since we met last September, I’ve had a deep appreciation and admiration of your unique personality, especially as you are standing very strong in the counterterrorism field to counter this evil ideology that is claiming innocent lives, that is bringing devastation to communities and nations, and that is terrorizing innocent people.

Your Excellency, very strongly and very openly, you will find Egypt and myself always beside you in this, in bringing about an effective strategy in the counterterrorism.

The second point, Your Excellency, is that you’ll find me supporting you very strongly and very earnestly in finding solution to the problem of the century.  And I’m quite confident that you will be able to bring a solution to this issue.

PRESIDENT TRUMP:  We will — that I tell you.  We will.

PRESIDENT TRUMP:  We will do that together.  We will fight terrorism and other things, and we’re going to be friends for a long, long period of time.  We have a great bond with the people of Egypt, and I look forward to working with the President.  And we have some interesting conversations going to start effective immediately, and then we’re going into the Cabinet Room and we’re going to meet with your representatives.

So again, thank you very much for coming.  And I look forward to a very long and strong relationship.