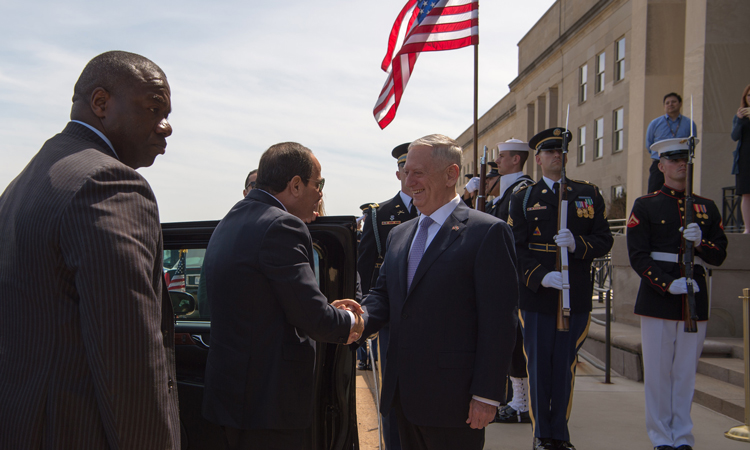 SECRETARY OF DEFENSE JIM MATTIS: Well, welcome to the Pentagon, Mr. President. We first served together when we were both in uniform and it seems like a long time ago, but not so long ago.

But thank you, Mr. President, Excellency, the delegation from Cairo. It’s really a pleasure to have you here. We met earlier this week in the White House for a very, I thought, productive and positive discussion. I think you know me well enough, Mr. President, to know that I am among those who believe that no country is more critical to the long-term stability of the Middle East than Egypt.

I recognize that through a time of turmoil and transition, Egypt has remained a center of gravity in the region, and through all these times, for whatever may have happened between us, we remain friends — first and last, friends.

Egypt continues to play a role, it’s actually a critical leadership role helping our diplomatic counterparts advance our shared security interests, whether it be Libya next door to you, the Syria situation or the greater Levant, whenever we need advice, we turn to Cairo.

Our military-to-military relationship, Mr. President, is based on mutual respect built over many years and it acts as a steadying influence and I think it is fundamental to giving your government and people a path toward a safe and prosperous future. In particular, our cooperation to counter terrorism is very, very strong and I’m committed to strengthening those efforts alongside you.

Above all, thank you, Mr. President, for your personal leadership in calling for a more tolerant relationship among all peoples and all religions. I look forward to visiting Egypt again soon in just a couple weeks and paying my respects to your country in person.

PRESIDENT ABDEL FATTAH EL-SISI (THROUGH TRANSLATOR): Thank you very much. I have the pleasure today to visit the Pentagon and have this opportunity to meet with Secretary Mattis, whom I express all thanks and appreciation for the hospitality and warm welcome.

On this occasion, I’d like to stress the long established and multifaceted military-to-military relations that the United States and Egypt share, for decades now considered a major pillar of the strategic relationship binding the two countries together.

The existing cooperation between the two military institutions of Egypt and the United States has always contributed to maintaining security, stability in the Middle East. And today, again, I am confident that maintaining this level of outstanding coordination working on promoting that and bringing that to a whole new level will enable the two countries positively in countering the unprecedented and shared challenges that the Middle East region is suffering from.

This region more than any time ever needs more activation and more regular cooperation between our two countries.

I look forward to having fruitful and constructive discussions with the secretary of defense, and ways to enhance all aspects of our military-to-military relationship, and ways also to boost the existing partnership between us in this respect at all levels that will contribute to the restoration of security and stability to the Middle East area, and ensure that interests of the two friendly nations.

Thank you, members of the press.

SEC. MATTIS: Thank you, members of the press.

Q: Mr. Secretary, who’s responsibility for the attack in Syria? Was it the regime?

SEC. MATTIS: We’ll sort that out.