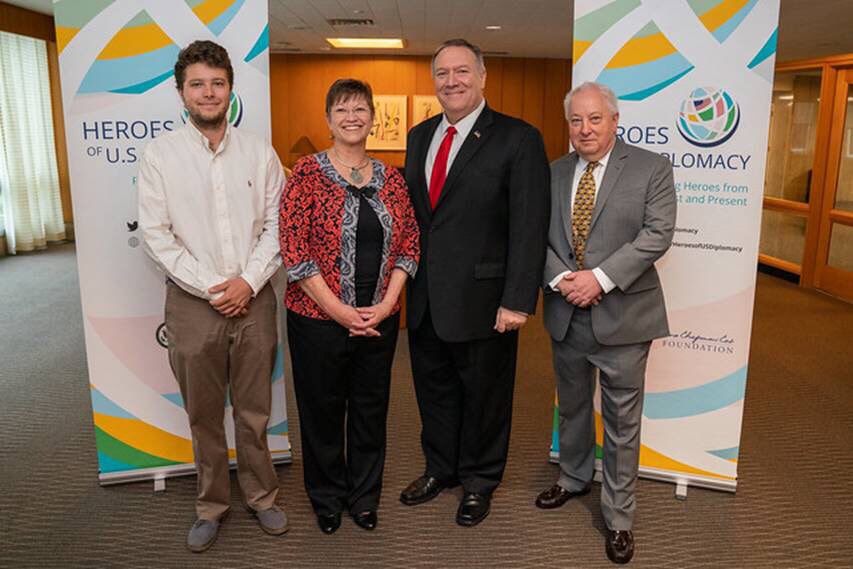 SECRETARY POMPEO:  Good morning, everyone.  It’s wonderful to be with you all.  When I walked in, there was a lot of applause.  Lizzie, I know exactly who it was for.  (Laughter.)

I want to start with a story today.  The date was August 7th, 1998.  Lizzie Slater had just arrived at the U.S. Embassy in Dar es Salaam, on the coast of Tanzania, for her second day as a Foreign Service IT specialist.  Just three days before, she said goodbye in London to her then five-year-old son, Forbes, and husband, Charlie, who was also a member of our Foreign Service.

On that August day, after reporting to work, she went to the embassy’s community liaison office for a “Welcome Post” briefing.  You all know them.  As she stepped into the room, everything went black. Then she heard screaming.

As we now know, a truck bomb with 2,000 plus pounds of TNT detonated just 50 feet from where Lizzie was standing.  She was instantly thrown back and buried in concrete, leaving her with blunt force trauma, bruising from head to toe, and significant facial injuries.

But none of that stopped her from getting back to work that very same day. As the soon-to-be sole information management specialist at post, she felt she couldn’t let her team down as they set up a temporary facility, a temporary embassy nearby.

Now in most lines of work, the caliber of courage displayed by Lizzie Slater would be one in a million.  But I must say here in the State Department that it is representative.  Representative of the fine men and women who show up day in and day out to carry out America’s foreign policy.

And today, we have the incredible privilege to recognize Lizzie as the first in a series of our “Heroes of Diplomacy” whose stories we will share over the coming year.  We want to highlight – we want to highlight too historic heroes, those whose service is over but whose legacy must live on.  America needs to know these stories.

And coming from a military background, I’m accustomed to hearing my fellow soldiers referred to as “heroes,” and rightfully so.  But at the State Department, we’re hesitant often to lay claim to that term.  Yet as I’ve traveled to several dozen posts all around the world, it’s become clear that we must move past our reticence. We have to tell these stories.

We have to tell them first to our colleagues here, our team.  These Heroes show us what we can all achieve by putting our intellectual, moral, physical courage to work in service to America’s mission.

They show too how we better fulfill the principles enshrined in our ethos, including our foundational documents, the Constitution, and protecting American people, and serving with unfailing professionalism, even in the face of adversity.

We too are going to tell these stories to the American people, so that they know – they know the service, sacrifice, and honor that “comes standard” for America’s diplomatic champions – even those whose stories they have not heard before.

I get this incredible window into your work.  I have the privilege everyday of seeing our heroes at work.

I see the mother working at our headquarters, who stays late all week because she knows the assignment will create a safer world for her children.

I see our locally employed staff do amazing things at a foreign post, one who isn’t an American himself, but proudly shows up to serve on behalf of America each day because he knows what our country represents.

And I see young people graduating from America’s best institutions, who get a great job, a chance to make a whole bunch of money someplace in the private sector, but who opts instead for a life of service in the State Department because what she prizes the most isn’t money, it’s meaning, and knows the importance of the work that we do.  (Applause.)

I have to tell you, and you’ve heard me say this before, and I’ll say it many, many more times: The State Department is filled with these individuals.  They are not one-off.  Our team members have courage, and skill, and servant hearts.  We are one team working on a singular mission for our one future.

And while it’s an incredible privilege to be surrounded by these heroes of diplomacy every day, stories like Lizzie’s aren’t exceptional other than in their uniquely wonderful work on behalf of America.

In the 21 years since the bombing, she has run towards – not away from – challenging assignments from Baghdad to Kabul, most recently in Cairo, Egypt.

Her colleagues tell me today that they have a hard time getting her to slow down.  Looking at her family members, I think they sense that too.

They tell me that one year, Lizzie spent Thanksgiving Day in Kabul pulling cable with her team in the rain and the cold, to get our USAID colleagues back online.  She refused to come in for Thanksgiving dinner until they had the connectivity restored.  She knew how important that was.

And because of that commitment and because of that skill, we’re now entrusting Lizzie with an important new assignment.  She will be the Dean of the Foreign Service Institute’s School of Applied Information Technology.  (Applause.)

Lizzie will be working to equip all of the department’s IT professionals with the same know-how and grit that has enabled her to meet our department’s technology needs in such an exemplary manner.

But first, she’s here to kick off our “Heroes of Diplomacy” initiative by sharing with us some of the many lessons she’s learned throughout her career.  I think you’ll really enjoy the conversation that she and Carol will have.  And without further ado, please join me in welcoming Lizzie Slater and Director General Carol Perez to the stage.  (Applause.)