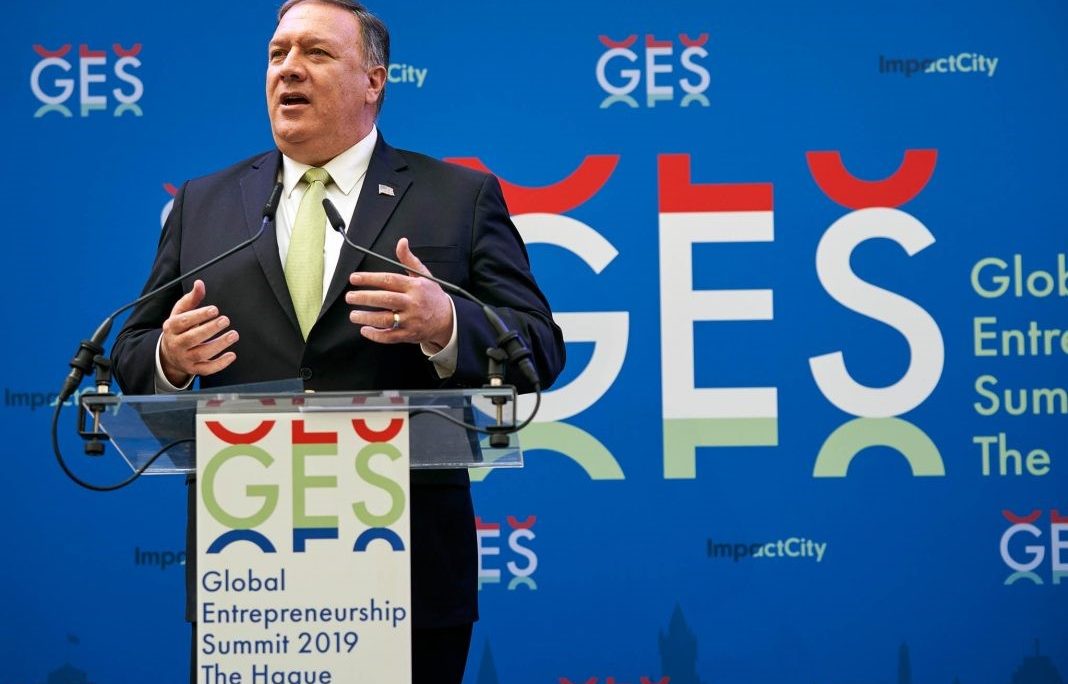 THE HAGUE, THE NETHERLANDS

SECRETARY POMPEO: Good afternoon, everyone. Welcome. The prime minister and I were just remarking on what a great crowd, what a great group we have here. Thank you, Madame Mayor, for joining us as well and hosting us. I want to thank the prime minister as well, and frankly, the Dutch people for welcoming us to your country.

We are honored to co-host this 9th annual Global Entrepreneurship Summit with our Dutch friends. I – before I entered political life, I ran two small businesses. I know the risk you take every day, the capital you deploy, and I know that we can’t accomplish our national security missions, as the Secretary of State, our diplomatic mission, without strong economies. So thank you all for joining us today.

Our two countries share an abiding belief in this very power of entrepreneurship. It is the Dutch, after all, that brought the spirit of entrepreneurship to the Americas. You established fur and spice trading posts along our eastern coast, including a little settlement named New Amsterdam. (Laughter.) Look, it’s – New York City has now become the home to countless entrepreneurs, including our current president.

The American story has been written, in no small part, by entrepreneurs, risk-takers: the likes of Edison, Forbes, and Ford and Jobs. This history isn’t unique to us in the United States. The Netherlands has also generated visionary entrepreneurs like Gerard Philips, of Philips – or more recently, Jaap Haartsen, who helped develop the Bluetooth technology that we all rely on today.

And all throughout, all throughout the free world, the progress of nations is driven by those who are willing to take a big risk, to put their own capital out there, to fail sometimes and then fail again until one day success follows you.

So I want to spend just a few minutes today talking about the principles that foster entrepreneurship in any society, how it is that government can get out of the way so that you all can do what it is you do that makes families here in the Netherlands and families in the United States thrive and grow.

Look, let’s acknowledge that it takes amazing people, people like you all here. We’ve got more than 1,000 of the most promising entrepreneurs from 140 different countries who have joined us at this summit. You are, indeed, living proof – living proof of markets, of how innovation is driven by competition and not by government diktats. You’re developing new medicines that can regenerate damaged heart tissue. You’re inventing solar-powered backpacks that allow African children to use electronics in their schools. You’re building software; you’re building software that allows small farmers in Colombia to access the same agricultural supplies that bigger farms are able to do in Western countries.

More than 300 investors who back your ideas are here, too, to back up those ideas. I hope you’ll get a chance to meet each other and create some important strategic and investor relationships.

And then there’s one last group, one last group represented at this summit: government leaders. Okay, don’t all cheer at once. (Laughter.)

Yeah, government leaders can bridge value – excuse me, bring values to entrepreneurs, if, and only if, we are capable of creating a necessary environment for which you can – in which you can thrive. And I want to talk about what those conditions are. We know them in the United States. We know them here in the Netherlands.

You don’t have to take my word for it. Steve Jobs put it this way. He said, quote, “If protection of intellectual property begins to disappear, then creative companies will disappear or frankly just never get started,” end of quote.

Property rights are the bedrock of any successful economy. It’s why America insists on these protections in our society and in the trade deals that we enter into as we move forward.

The second thing entrepreneurs need is the rule of law. It’s pretty basic – a legal system that is predictable, consistent, creates enforceable rights, and creates understandings among suppliers and customers and employees – all of those things that permit organizations to thrive and to prosper.

Before I entered government, I talked to you about my time as an entrepreneur. I founded a small manufacturing company. It was critical to know that the government wasn’t going to change the rules on a bureaucratic whim. We were depending on that consistent fair set of rules.

In parts of this world, authoritarian states can steal ideas and they can prop up their own business and their own business enterprises, but you should know that they will never in the end match the entrepreneurship and innovation found in free and open societies because their incentives are just all messed up. The same goes for democratic, developed countries that wield regulation for political ends. It can’t work.

Third – and you all know this too – third, government has to stop strangling business. Under President Trump, we’ve slashed unnecessary regulations in the United States. We have reduced corporate taxes. This has encouraged companies from the Netherlands to invest in the United States, it’s created incentives for American companies to invest all across the world.

And in our home country, these actions have had undeniable results. We for a long time in America thought that the “new normal” was 2 percent economic growth. That’s not the case here; it’s not the case in any society that obeys these simple free market principles. Our jobless rate today is the lowest in the United States of America in 50 years, five decades. Job creation among the smallest businesses in America recently broke a 45-year record.

We’re proud of these accomplishments, because they were – there was a central thesis behind it, the very principles I described, that the formula of lower taxes and a light touch on regulation, it works not only in the United States; we believe it works everywhere.

So here is an idea: Let’s everywhere in the world make entrepreneurship great again. (Laughter and applause.) There’s a lot more that I could say, but you all know most of this, and I promised that I would be very brief today. And I wish I could stay for all of the summit. I wish I could get a chance to shake everyone’s hand here for their willingness to engage in this competitive marketplace and take risks for themselves and those around you. You will ultimately drive the success not only for your family, those around you and your business, but for our nations as well.

I’ve got to join the President tonight in London. He and the First Lady are there for an official visit, and then they’ll go on to another remarkable historic moment. It’ll be the 75th anniversary of D-Day, when American and Allied forces rolled back tyranny and laid the foundation for a new era of democracy and freedom, one that we all benefit from today.

As entrepreneurs, you carry on that effort, the ongoing story of prosperity, of progress, of human flourishing, the recognition of the fundamental nature of dignity of every human being.

So I hope you’ll take what you learn from this summit. I hope you’ll take it back home. Then I hope you’ll bring your money to the United States and invest there. (Laughter.) But more importantly, though, I hope what you’ll do is you’ll take the very best. You’ll begin to solve problems, you’ll innovate, you’ll create value for yourselves and for your fellow man. Go out there and crush it. Thank you.