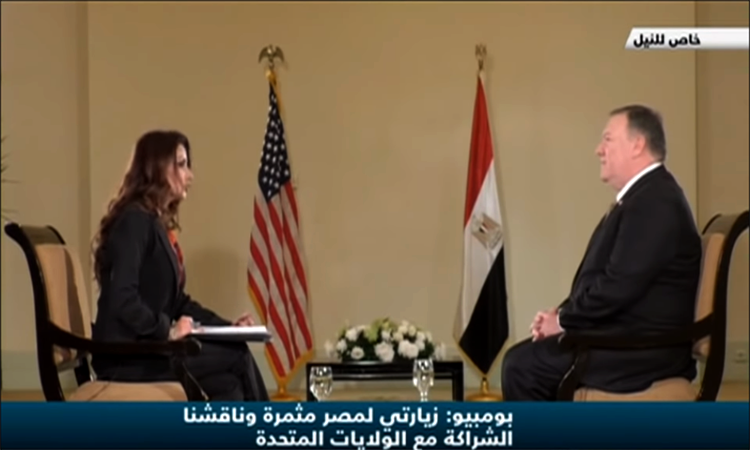 QUESTION: Secretary of State Mike Pompeo, I appreciate your time, and let me first start very quickly and briefly with your feedback about your visit to Egypt, including the meetings you held here.

SECRETARY POMPEO: Well, thanks. It’s great to be with you. We had a very productive time here in Cairo. We achieved a great deal in the partnership between the United States and Egypt. We talked about a range of issues, about economic growth and prosperity here in Cairo and in greater Egypt as well as security issues in the region.

QUESTION: How will you transform your support to Egypt into tangible procedures in the coming time?

SECRETARY POMPEO: Yeah, so there’s lots of things, and we’ve already done good work. We’ve done good work supporting Egypt’s need for counterterrorism assistance. We’ve done good work with American businesses coming here. Each of these things will be built upon in the days and weeks ahead. Had a good conversation too once more confirming the important partnership between our two countries.

QUESTION: You also visited the cathedral and mosque this morning. What’s your feedback on this visit?

SECRETARY POMPEO: So it was a remarkable visit to those two beautiful places of worship, and they are a hallmark for the whole region. These are beacons of religious freedom demonstrating that here in the heart of the Middle East you can have Christians and Muslims all worshiping in their own way, in their own unique way, but do it in the sense where there is security and tolerance for each of those religions. It was important. It was a great visit, and I thank the imam and the bishop for hosting me.

QUESTION: Along your strategic relationship with Egypt, do you see a need now for an upgrade for the military assistance to meet with the current threats from the terrorist groups?

SECRETARY POMPEO: So there is always work to do. Indeed, the remarks that I gave yesterday focused in good part on this threat from extremism. The Egyptians have been great partners in that. We now have work to do not only here but all across the region to create the conditions where the threats that come from the world’s largest state sponsor of terror country in the world, Iran, threats that come from Daesh, each of those threats can be handled in a comprehensive way, so people in the Middle East can live in peace and harmony and live their lives the way that they want to.

QUESTION: Why are you still not designating or reluctant to designate the Muslim Brotherhood as a terrorist group when you personally cosponsored the Congress designation bill in 2015? President Trump talked about this and his willingness among other U.S. officials who also pointed on this issue.

SECRETARY POMPEO: So it’s something we look at constantly. There has been no nation that rivals what the United States has done in terms of applying security pressure, financial pressure, economic pressure, on all of those elements, whether it be al-Qaida or HTS, any extremist group. The United States is leading the effort to push back against them. We understand that absent a comprehensive effort against extremism the world will be a less safe and prosperous place, and Egypt will suffer from that as well.

QUESTION: Yes, but do you share the same views expressed by former Secretary of State Tillerson June 2017, when he stated that it is a problematic issue to designate the MBs because some of them are already occupying posts in government, like in Turkey for example?

SECRETARY POMPEO: So you saw what I did when I was a member of Congress.

QUESTION: Yes, I did.

SECRETARY POMPEO: We need to build a broad consensus in the United States on all issues related to sanctions. We’re working to do that.

QUESTION: Okay. President Trump announced a full defeat of Daesh, however reports stated that regional countries are the main funding streams. There must be also – there must be always a funding channel for the terrorist groups. President Trump pointed or called on Qatar once. The administration called another time on Qatar when – to stop funding through Iranian militias, many of them regarded, of course, as terrorist organizations by Washington. How are you going to deal with that – the countries, the regional countries who are accused of supporting terrorist groups in the area and abroad as well?

SECRETARY POMPEO: It’s a great question. We are working to cut off funding for terror groups wherever the source of those funds. We have now put in place the largest sanctions in history against the Islamic Republic of Iran, a place from which much terror is generated. But make no mistake about it, the United States is equal opportunity when it comes to pushing back against terror finance. Whether that terror finance stems from Qatar, from Saudi Arabia, from the Emirates, from Egypt, from anyplace in the world, we are diligent. Your point is exactly right. Absent the financial capacity to fuel this extremism we can reduce the risk, and so that is certainly one of the central aims of this administration, to cut off the financial ties to terror that emanate frankly not only from the Middle East but from all across the world.

QUESTION: Let’s move quickly to your pullout strategy from Syria. I don’t want to repeat the same questions you’ve been asked, but along the strategy that you are going to reveal in the coming days, how are you going to: one, secure the Kurds from Turkish violations; and how do you react to the Turkish demands of refusing your military bases, especially the one on the borders of Iraq at al-Tanf?

SECRETARY POMPEO: Yeah, you ask an important question. So the President’s decision to withdraw our 2,000 uniformed military personnel from Syria has been made. We will do that, but we’ll do so in a way that makes sense, that is orderly, that does everything we can to ensure the security of those who fought alongside us defeating the caliphate inside of Syria, but importantly also permits us to continue the counter-ISIS campaign. We know – we fight against ISIS in West Africa, in Asia – it is a global phenomenon. It’s not simply in Syria. It’s certainly in Iraq as well. We have a duty to continue that campaign, and President Trump is deeply committed to that.

QUESTION: How do you react to your Turkish counterpart just two days ago his latest accusation of the U.S. reluctance to withdraw from Syria due – this is what he said – due to your coordination with the terrorist elements?

SECRETARY POMPEO: I’ll speak with my Turkish counterpart today. Conversations with them continue. We will come to a place where there is a common understanding about how it is we’re going to execute this decision that President Trump made in a way that is orderly and productive.

QUESTION: Last question. You postponed your announcement of your suggested peace plan known for “the deal of the century.” How do you think or expect consensus on your peace plan when you pressured the Palestinian, one side of the conflict, twice – when you ended all funding to the UNRWA and, second, when you shut the Palestinian mission in Washington?

SECRETARY POMPEO: So we’ll move forward on the peace plan, as is appropriate. There’s been a lot of work done. Consultations with countries, including Egypt, in the region continues even this month. Lots of conversations about how not to just unveil a plan but how to actually achieve something that’s been struggled – that the people have struggled with for decades.

With respect to the Gaza Strip that you referred to, make no mistake about it, the disaster, the difficulties there in that region, are the result of Hamas and the terror that they have inflicted on the Palestinian people there in the Gaza Strip. America is a force for good throughout the Middle East, and our peace plan will demonstrate that we can be a force for good in the resolution of the conflict between Israel and Palestinian – the Palestinians as well.

SECRETARY POMPEO: Goodness, I don’t know. We are involved in Syria in enforcing UN Security Council Resolution 2254. I wish the Russians were being cooperative there and moving towards a political resolution of the conflict in Syria. We ask for their assistance there. Make no mistake about it, when countries are looking to establish stability and peace in this region, it is the United States which is almost always leading and in the forefront of that.

QUESTION: Secretary of State Mike Pompeo, thank you very much. Appreciate your time. Thank you.

SECRETARY POMPEO: Thank you very much. You have a great day.