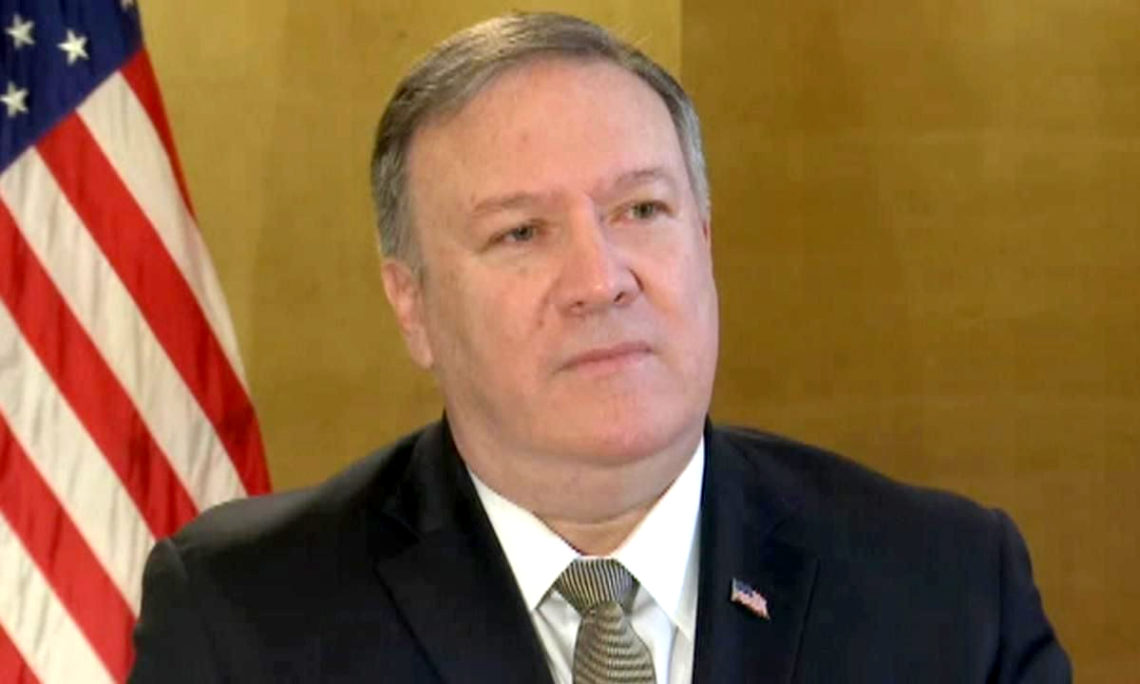 QUESTION: Mr. Secretary, thank you so much for joining us.

SECRETARY POMPEO: Rich, it’s great to be with you this morning.

QUESTION: We’re in Egypt, where the State Department says it wants broader cooperation with Egypt on human rights. Is it difficult when President Sisi says, as he did in an interview this week, that he doesn’t have political prisoners here?

SECRETARY POMPEO: We had great conversations about a broad range of topics. Human rights is always part of that conversation. Anytime that State Department officials travel anywhere in the world, we want countries to treat each of their citizens with dignity and respect, the rule of law. Those are important values of America.

SECRETARY POMPEO: And American citizens who are traveling in the countries as well or maybe living or doing business in the countries, absolutely. So we have those conversations. Not every country rises to the same level that America has, but it’s an expectation that we set with each country to which I travel.

QUESTION: And discussing State Department efforts on freeing Americans who are imprisoned, quickly on Paul Whelan in Russia. The Russian Government says he was caught spying red-handed. Your comment on that? And can the United States unequivocally say that he wasn’t spying for the U.S.?

SECRETARY POMPEO: Rich, unfortunately, I can’t say much more than has already been said. But the American people should know the Trump administration is very focused on making sure that every American who’s detained anywhere in the world has been treated properly, handled accordingly, and where they are not, using every lever of U.S. power to make sure that they are returned home safely to their family. That’s the case in Russia. It’s the case all across the world. For a lot of reasons, I can’t say much more about that particular case.

QUESTION: And you can’t deny that he wasn’t spying for the U.S.?

SECRETARY POMPEO: I just don’t have anything I can add, Rich.

QUESTION: You spoke yesterday about the need for a political solution in Syria. Can Bashar al-Assad be part of that solution?

SECRETARY POMPEO: Well, we’ll see how the UN Security Council resolution enforcement action takes place. We are very hopeful that we will get the bad actors in the region, the Russians and the Iranians, to come to the table along with the regime and all the other stakeholders, they come to the table and have conversations about what a post-civil war political structure might look like in Syria. It’s been very difficult. Those who have caused so much grief, so much strife, 6 million displaced persons from Syria to date, have yet not demonstrated their willingness to come be part of that political conversation. We’re willing to make sure all the options are open as that political discourse begins.

QUESTION: But the idea that the United States was saying a year ago Assad must go, is that still in effect?

SECRETARY POMPEO: The Syrian people will ultimately decide who is going to lead that country. The political process is the way we get to empower those people inside of Syria.

QUESTION: You said yesterday that you want to expel every last Iranian boot from Syria. How do you do that?

SECRETARY POMPEO: It’s part of a larger effort that the United States is undertaking. We view the malign activity from the Islamic Republic of Iran, this revolutionary force in Iran, as creating enormous instability here in the region, and so part of that is making sure that Iran doesn’t destabilize or continue to destabilize Syria.

And so yes, we will use the full power of the United States to achieve that outcome. It’ll be a broad range of ways in which we do that. We’re not going to talk about what those tool sets are precisely. But make no mistake about it, whether that is the support of Lebanese Hizballah, the support of some of the Shia militias in Iraq, the funding that goes to Yemen, these are things that – to the Houthis in Yemen, these are things that the Iranians are doing to destabilize the Middle East at enormous cost to the people of Iran.

QUESTION: And this is something that needs to be coordinated internationally, more so than is happening now?

SECRETARY POMPEO: We will build out the global coalition. Indeed, Rich, I want to announce this morning that in a month from now, on February 13th and 14th, the United States will host a global ministerial on Middle East peace and freedom and stability. We’ll bring together dozens of countries from all around the world, from Asia, from Africa, from Western Hemisphere countries, Europe too, the Middle East of course. Countries will all come together to focus on Middle East stability and peace and freedom and security here in this region, and that includes an important element of making sure that Iran is not a destabilizing influence. It’ll be a big ministerial. It’ll be an important part of our coalition-building effort. We’re really looking forward to it.

QUESTION: Part of that, I am sure, is coordination with Saudi Arabia, where you’re headed very soon. In the Khashoggi murder case, the President has said that the cover-up is one of the worst in the history of cover-ups. Just before your trip, State Department officials previewing your trip said that the Saudi narrative hadn’t yet hit a threshold of credibility and accountability. Are you personally thus far satisfied with Saudi Arabia’s response to this?

SECRETARY POMPEO: Let me just (inaudible) here. This administration has been clear the murder of Jamal Khashoggi was a heinous atrocity and something that is completely unacceptable, and we are working to hold everyone connected to that accountable. We’ll continue to do that as facts unfold. We’ve already sanctioned a number of people, and we’ll continue to do that.

But my trip – I’m headed to the Gulf now, as you describe, including to Saudi Arabia – is aimed squarely at making sure that we have partners in keeping the American people safe. These important strategic partners throughout the Gulf are central to making sure that terrorism from this region doesn’t strike in the homeland.

SECRETARY POMPEO: And we’ll do that. And with respect to Saudi Arabia, we’ll continue to do that there as well.

QUESTION: Mm-hmm. And your personal view on whether they’ve lived up to the threshold of credibility?

SECRETARY POMPEO: We’ll continue to work to make sure that everyone responsible for the murder of Jamal Khashoggi is held accountable. The United States will continue to do that.

QUESTION: In announcing those visa waivers, you said the penalties will not be the last word on this matter from the United States. Is that still the case?

QUESTION: The Washington Post has reported that Mohammed bin Salman is in regular contact with Saud al-Qahtani, the same person that the Treasury Department said was a part of the planning and executing of Khashoggi’s murder. Is that an indication to you that perhaps he needs to move further, or —

SECRETARY POMPEO: Yeah, so I’m not familiar with the Washington Post reporting. I tend not to comment on that. Suffice it to say we’ll have a broad discussion about the relationship between the United States and the Kingdom of Saudi Arabia, one that is incredibly important to the American people.

QUESTION: And North Korea, that always seems to be a part of the discussions. In his New Year’s address, Kim Jong-un floated a production cap and a pledge not to transfer arms in exchange for sanctions relief. Can you rule that out as a possibility, because that would be sanctions relief before the complete, verifiable denuclearization?

SECRETARY POMPEO: The good news is our conversations with North Korea continue. They’re out in the public light, they are going to remain so, so I won’t share with you this morning things that are being discussed in our negotiations. But we’re moving forward in these conversations, lots of ideas about how we might continue to decrease the risk to the American people. Remember, Rich, at the end that’s the objective; it’s the security of American people.

And so reducing the threat from North Korea, whether that’s by our success to date in stopping their missile testing, stopping their nuclear testing, those are the important elements. We’ve got to get to full and final denuclearization. We’ve been unambiguous when we speak with Chairman Kim and other Korean interlocutors. I am hopeful that in the year ahead we can make substantial progress on that, including getting another summit between the two leaders.

QUESTION: And the position is still the same: They must give up their nuclear weapons in order to get sanctions relief from the United States?

SECRETARY POMPEO: I don’t think there has been a single variant from the core proposition, which is the fully denuclearized North Korea as verified by international experts, is the objective of this administration. We intend to achieve that.

QUESTION: Mr. Secretary, thank you for joining us.