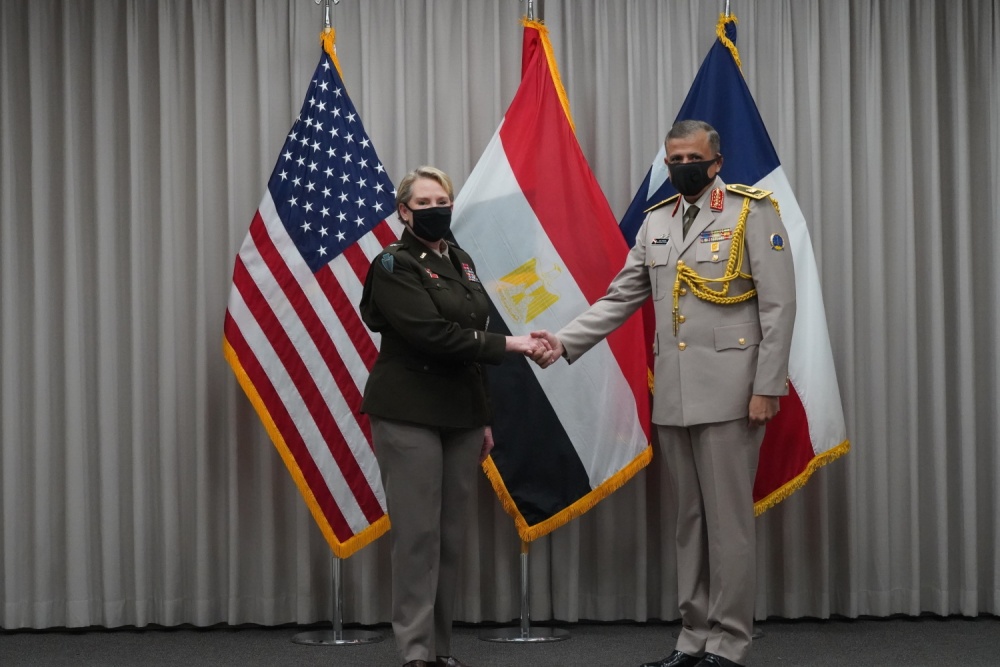 Texas – On August 24, the U.S. State of Texas and the Arab Republic of Egypt took the first step in forming a long-term partnership under the U.S. National Guard’s State Partnership Program. At the historic Camp Mabry in Austin, Texas, Secretary of State for Texas Ruth R. Hughs; the Adjutant General of the State of Texas, Major General Tracy R. Norris; and Egypt’s Defense Attaché to the United States Major General Abdelraouf A. Moussa affirmed their intent to form a long-term partnership between the Texas National Guard and the Egyptian Military.

At the event, Major General Tracy R. Norris highlighted past and future cooperation: “The Texas Military Department is proud to play a key role in the overall U.S.-Egypt relationship. From the Texas National Guard’s continued participation in Exercise Bright Star – a decades-running, multilateral defense exercise, to Texas National Guard units supporting the MFO’s mission in Sinai, Texas is a key player in the military partnership between our two countries. The formal establishment of our partnership through the State Partnership Program codifies and makes official a relationship between our militaries that has been in the making for decades.”

In conjunction with the signing in Texas, U.S. Ambassador to Egypt Jonathan Cohen noted that the U.S. military relationship with Egypt has been a foundation of the U.S.-Egypt strategic partnership for more than forty years. “Defense cooperation with Egypt is a cornerstone of our strategic partnership, spanning counterterrorism, border security, and joint training and planning to address complex geopolitical challenges.”

Egypt’s Defense Attaché Major General Moussa and other Egyptian officials also toured Texas military facilities and observed operations at the U.S.-Mexico border. A formal signing ceremony of the State Partnership program is scheduled for later this year in Cairo, at which time Egypt will have the opportunity to showcase its military capabilities for visiting U.S. officials. This long-term partnership will benefit both Texas and Egypt through the conduct of exchanges and exercises in the areas of C-130 and F-16 flight maneuver and maintenance, cyber defense, logistics, special forces, homeland security response preparedness, military support to civilian authorities, and humanitarian and disaster assistance response.

While the Egypt-Texas partnership is the latest partnership, the U.S. National Guard’s State Partnership Program has been successfully building relationships for over 25 years, and now includes partnerships with 84 nations around the globe. These programs link a unique component of the Department of Defense – a U.S. state’s National Guard – with the armed forces or equivalent of a partner country in a cooperative, mutually beneficial relationship.