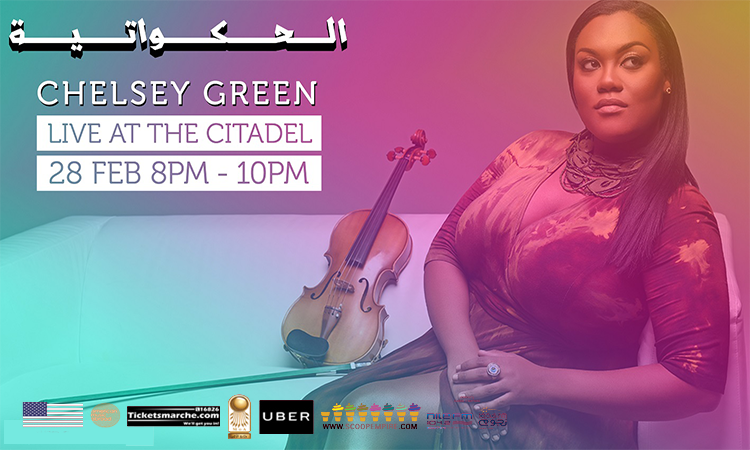 Cairo – The U.S. Embassy welcomes American violinist Chelsey Green and the Green Project, as the popular jazz band visits Egypt next week for the first time.  Their historic concert tour, titled “Hakawatya,” will feature performances at the Citadel in Cairo on February 28 and at the Bibliotheca Alexandrina in Alexandria on March 3, and will include joint performances with renowned Egyptian musicians Dina El Wedidi and Fathy Salama.

Chelsey’s music has been described in the American media as “vivacious” and “electrifying,” as she creates innovative jazz by fusing traditional, classical technique with Pop, Soul, Hip Hop and Gospel.  Meanwhile, Egyptian music revivalist Dina El Wedidi captures elements of traditional Egyptian tones and lyrics from their original forms and re-contextualizes them. More information about the upcoming concerts is available at the event page and tickets are available through Ticketsmarché.

“The artistic collaboration of Ms. Green and her band with Dina El-Wedidi and Fathy Salama reminds us of the power and attraction of cross-cultural exchange and expression,” said Adnan Siddiqi, Counselor for Public Affairs at the U.S. Embassy Cairo. “As we approach the end of Black History Month in the United States, we are thrilled to bring Chelsey to Egypt to share her amazingly diverse repertoire, and her message of peace and friendship.”

Ms. Green’s visit is being supported through the U.S. Department of State’s American Music Abroad (AMA) program, which sends talented musicians abroad as Cultural Ambassadors.  Ever since famed trumpeter Louis Armstrong visited Egypt in 1961, the U.S. Embassy has highlighted American jazz and the contributions of African-Americans to the arts through various programs and activities.  AMA programs allow American musicians to go on month-long, multi-country tours around the world, during which they engage with international audiences through public concerts, interactive performances with local musicians, jam sessions, workshops, and media interviews.