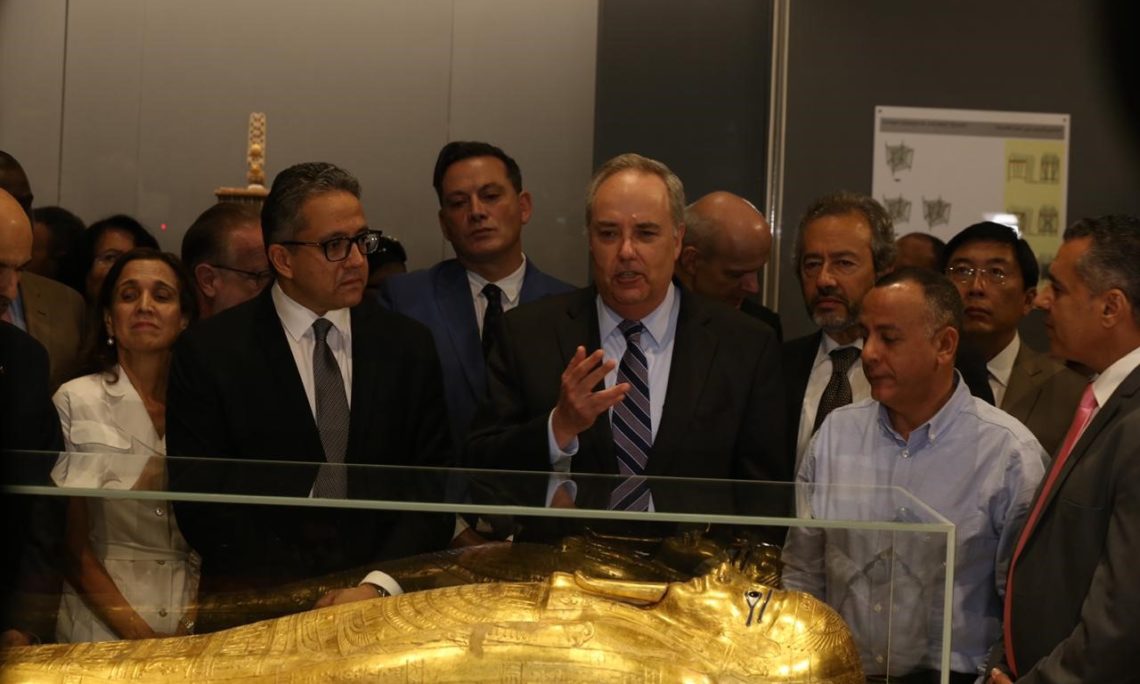 Cairo – Today, U.S. Chargé d’Affaires Thomas Goldberger joined Minister of Antiquities Khaled Al-Anany at the National Museum of Egyptian Civilization to welcome the return of the Coffin of Nedjemankh.

This coffin of a high-ranking Egyptian priest from the first century B.C.E. was stolen from Egypt in October 2011, smuggled and transported through a number of countries and then sold with fraudulent paperwork to New York’s Metropolitan Museum of Art in July 2017.

According to a statement from Homeland Security Investigations (HSI), part of the U.S. Department of Homeland Security, “Once presented with evidence of the theft, the Metropolitan Museum of Art fully cooperated, culminating in the repatriation of the artifact to Egypt.”  Peter C. Fitzhugh, special agent in charge of HSI New York, praised the collaboration between HSI New York and the Manhattan District Attorney in the investigation, and welcomed the return of priceless cultural property such as the Coffin of Nedjemankh to its rightful homeland for its citizens to enjoy. At the ceremony in New York where Egyptian Foreign Minister took possession of the coffin, Manhattan District Attorney Cyrus Vance said, “I am honored to repatriate this extraordinary artifact back to the people of Egypt.”

Speaking on behalf of the Metropolitan Museum of Art, the Museum President and CEO Daniel Weiss said, “After we learned that the Museum was a victim of fraud and unwittingly participated in the illegal trade of antiquities, we worked with the DA’s office for its return to Egypt. The nation of Egypt has been a strong partner of the Museum’s for over a century.”

U.S. Chargé d’Affaires Thomas Goldberger commended the Ministry of Antiquities for its communication and continued cooperation with the staff at the U.S. Embassy. According to Goldberger, “We are very glad to see this important piece of Egypt’s cultural heritage back in Egypt where it belongs and where it can be enjoyed by Egyptians and the millions of others who come to Egypt every year.”

From the U.S. side, the return of this important artifact to Egypt does not end the investigation, and the United States will continue to use our law enforcement agencies as well as our Memorandum of Understanding on Cultural Property, which the U.S. signed with Egypt in November 2016, to continue to prevent and address the illicit importation of cultural property from Egypt into the United States.