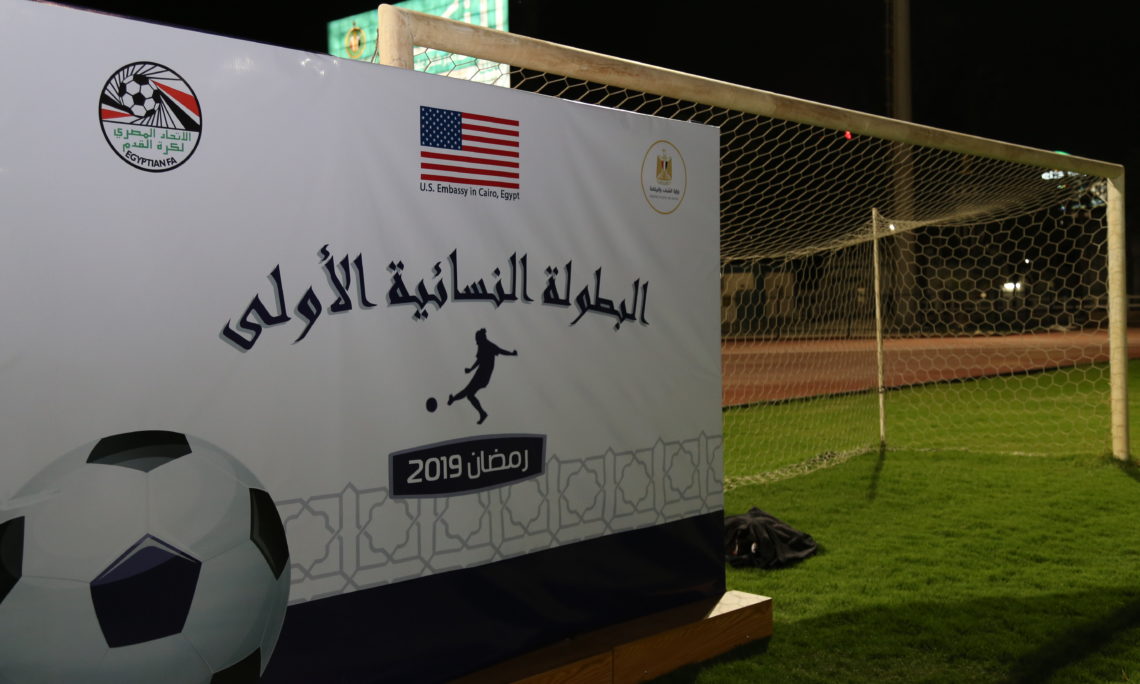 Cairo –U.S. Women’s Soccer stars Linda Hamilton and Tiffany Marie Roberts will lead a coaching workshop for female players and their coaches from the Egyptian women’s Premiere League teams, May 12-16. Hamilton and Roberts are joined by retired U.S. Men’s soccer star Jeffery Alan Agoos. The three Americans are visiting Egypt as part of the U.S. Department of State’s Sports Envoys program, in partnership with the Ministry of Youth and Sports.

The workshop will focus on the important role coaches have in empowering young women on and off the field, and will offer an opportunity for the American and Egyptian participants to exchange ideas on the latest techniques in soccer coaching.  To demonstrate and enhance the coaching skills being taught at the workshops, the participating teams will play mini-matches throughout the week and will conclude with a final tournament on May 16 at the Gezira Youth Center.

“With the FIFA Women’s World Cup around the corner, we are delighted to bring these prominent American coaches to Cairo,” said Chargé d’Affaires Thomas Goldberger. “Our partnership with the Ministry of Youth and Sports demonstrates a shared commitment to empowering women and girls through sports, and we look forward to more successful collaborations in the future.”

Linda Hamilton is a retired American soccer player and former member of the U.S. Women’s national soccer team. She is currently head coach of the women’s soccer team at Southwestern University in Texas. Tiffany Marie Roberts is an American soccer coach, former defender, and Olympic gold medalist. She was also a member of the 1999 U.S. national team that won the 1999 FIFA Women’s World Cup. Jeffrey Alan Agoos is a retired American soccer player, and one of the all-time appearance leaders for the U.S. Men’s national team. Agoos served as the Sporting Director for the New York Red Bulls, and currently is the Vice President of Competition for Major League Soccer (MLS).

Sports Diplomacy programs supported by the U.S. Department of State are an integral part of efforts to build stronger relations between the United States and other nations. Follow the U.S. Embassy’s social media properties to track these Sports Envoys while they are in Egypt. (@USEmbassyCairo on Facebook, Twitter and Instagram.) To learn more about Sports Diplomacy and U.S. Sports Envoys, please see: https://eca.state.gov/programs-initiatives/initiatives/sports-diplomacy  and https://sportsvisitorenvoy.org