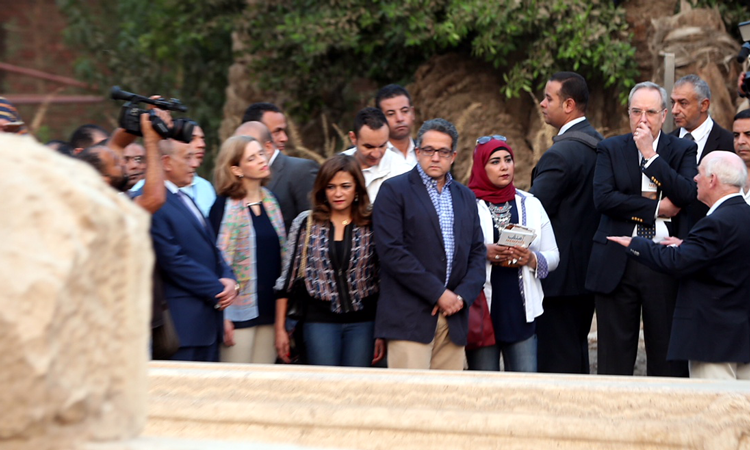 Cairo –Chargé d’Affaires Thomas Goldberger of the U.S. Embassy in Cairo and Minister of Antiquities Dr. Khaled El Enany celebrated on September 23 the completion of the Ancient Memphis Walking Circuit in Mit Rahina. The walking circuit connects eight archaeological sites in the center of Egypt’s first capital city of the Pharaonic period.

“This project is an investment in both the past and the future,” said Chargé d’Affaires Goldberger.  “The United States is committed to continuing our partnership with the Ministry of Antiquities to conserve Egypt’s cultural heritage and increase tourism.”

Many tourists visit the colossal limestone statue of Ramses the Great at Memphis, but fewer visit the surrounding eight sites where archaeologists have excavated important parts of Memphis.  These sites include the Great Temple of Ptah, the Apis House (a major tourist stop in Roman times), a temple to Hathor, a New Kingdom shrine, and a series of early tombs and residences.  This walking circuit includes new signage developed with USAID support by Ministry of Antiquities field school students, and will encourage visitors to learn more about ancient Memphis and contribute to the local economy.

The American people, through USAID, have provided assistance valued at over $100 million since 1992 for the preservation and restoration of cultural heritage sites in Old Cairo, Giza, Memphis, Luxor, Alexandria, Sohag, and Red Sea sites.